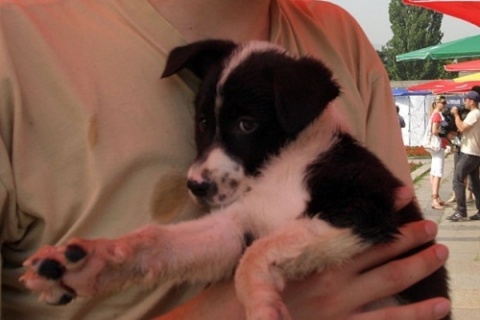 Animal right activists believe the more and more frequent cases of animal cruelty in Bulgaria result from the lack of real punishment for the perpetrators. Photo by Sofia Photo Agency

Animal cruelty is now considered a crime in Bulgaria to be punished by jail time or probation.

The last amendments in the Penal Code are becoming effective Wednesday, which also criminalize dog fights. The Bill was passed in April, but the Parliament postponed by three months the approval of the texts on animal cruelty.

The amendments were triggered by several widely publicized cases of animal cruelty across the country. The Animal Protection Act was adopted in the beginning of 2008, but it did not include sanctions for animal cruelty.

The amendments were finally introduced in 2010 by the cabinet after a dog was found in the central town of Dryanovo with her legs cut, stirring mass public outcry.

Individuals who premeditatedly kill an animal will face up to 1 years in jail and fines between BGN 1 000 and 3 000; those hurting an animal will face probation and the same fines. For repeated cruelty and extreme cruelty the penalty is up to 3 years behind bars and fines between BGN 2 000 and BGN 5 000. Vets and employees in animal shelters also face similar sanctions if they are cruel to animas.