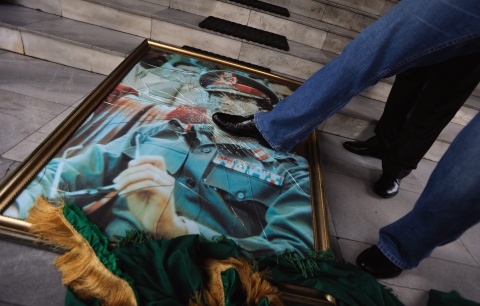 Libyans step on an image of Libyan leader Muammar al-Gaddafi at the embassy of Libya in Sofia, Bulgaia, 25 July 2011. Photo by BGNES

Diplomatic staff from the Libyan Embassy in Sofia, led by Ibrahim al-Furis, persona non grata in Bulgaria as of July 25, has taken control of the building, pledging allegiance to the rebel forces.

The group took down the Libyan flag, smashed a portrait of Gaddafi to pieces and laid hands on the mission's seal and cash box, pledging allegiance to the rebels.

The interim head of the Libyan Embassy and his secretary were temporarily detained after refusing to denounce Gaddafi.

The Bulgarian staff of Libya's diplomatic mission did not stop work and had not received any information about what was about to happen, according to a report of Bulgarian Dnevnik daily.

Bulgaria's Foreign Ministry explained that the decision for declaring al-Furis a persona non grata had not been taken as a result of him siding with the rebels from Benghazi.

He was declared declared as unwanted person in Bulgaria pursuant to Article 9 of the Vienna Convention.

The Bulgarian Foreign Ministry claimed that Consul Ibrahim al-Furis had been asked to voluntarily step down weeks ago and he had started preparations for his departure.

"I settled my bank accounts and the plane tickets but I decided to stay to clear my name and to protect my son", al-Furis told journalists.

The Libyan diplomat, who has 24 hours to leave the country, said Monday that he would not do it and would stay in Bulgaria.

He further explained that he expected to be named official representative of the Libyan rebel forces in Bulgaria in two weeks.

In the meantime, the Bulgarian authorities suspended contact with the Libyan Embassy in Sofia until "the situation becomes clear".