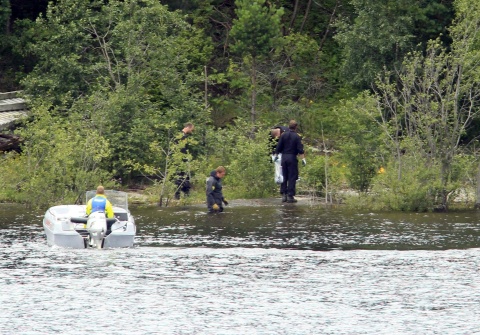 olice continue their investigations 25 July 2011 on the Utoya island in the Tyrifjorden lake where the 22 July shooting massacre took place. Media and the public were barred from the custody hearing of the suspect in last week`s attacks in Norway. Photo b

Norwegian police authorities have announced that the number of casualties on Norway's Utoya island where terrorist Anders Behring Breivik went on a killing rampage, is smaller than initially expected.

A total of 68 victims have been confirmed, including one who died at a hospital on Saturday, police officers have revealed, as cited by Dagbladet.

"On Friday night, we decided to announce a number of at least 80. It was necessary to announce a piece of information like that, since the press had informed that the victims were 10," Oeystein Maeland, director of Norway's National Police Directorate, has explained.

Initially, the police had reported of 86 casualties.

However, it has turned out that the victims in the Oslo bomb attack preceding the shooting, are now officially eight.

"That number may also change," Maeland has commented.

Anders Behring Breivik, 32, has admitted carrying out the massacre on the island youth camp and the bombing in the capital Oslo in which at least 76 people died. But he has refused to accept criminal responsibility for them, saying that his actions were "gruesome, but necessary".

During questioning, Brevik revealed that he had intended to kill former Prime Minister Gro Harlem Brundtland during her presentation on the island earlier in the afternoon but he was delayed.

The terrorist also stated he wanted to save Norway and Western Europe from what he perceived to be "cultural Marxists" and "the Islamic takeover", Dagbladet says.

Breivik explained that he attacked the Labor Party's youth camp on Utoya to prevent further recruitments of teenagers there.

Breivik is to be held in full isolation for the first four weeks, Judge Kim Heger has revealed, saying he could receive no letters, nor have visitors except for his lawyer.