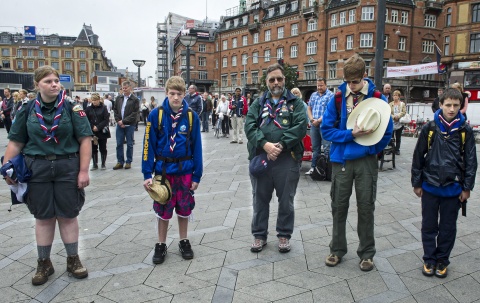 British scouts keep one minute of silence in Town Square in Copenhagen, Denmark 25 July 2011 for victims of the twin attacks in Norway on 22 July. Photo by EPA/BGNES

A minute of silence was called in Sweden, Finland, Denmark, Iceland, apart from Norway itself, to honor the victims of the deadly twin terror attacks in Oslo and Utoya last Friday.

Iceland also showed its solidarity with the people of Norway by keeping a minute of silence, as its Prime Minister Johanna Sigurdardottir had declared.

Sweden and Finland also kept a moment, with both countries flying their flags at half-mast. Norwegian Prime Minister Jens Stoltenberg observed the minute's silence alongside Norway's royal family at the University of Oslo.

In a blog post Swedish PM Carl Bildt Bildt called for a vigorous defence of the open society.

Breivik, 32, admited carrying out the  massacre on an island youth camp and the bombing in the capital Oslo in which at least 93 people died. But he has refused to accept criminal responsibility for them, saying that his actions were "gruesome, but necessary".