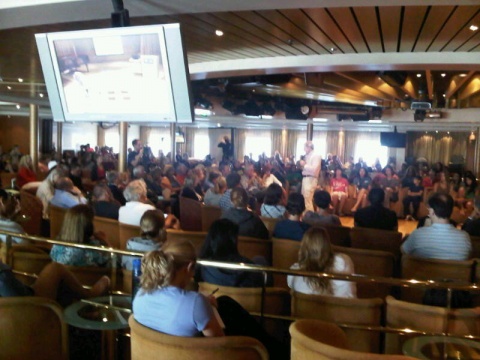 US Ambassador in Sofia, James Warlick, speaks to 650 American university students who arrived in Varna as part of the Semester at Sea program. Photo by American Embassy in Bulgaria

More than 650 students from 290 colleges and universities throughout the United States and around the world arrived in Varna Sunday as part of the Semester at Sea program.

The information was reported by the American Embassy in Sofia.

Semester at sea is a US-based global education program that takes place aboard a floating college campus. Varna is the sixth port of call on the program's 66-day voyage to 8 countries in Europe and North Africa.

Since it began in 1963, more than 55,000 individuals have participated in the program, which travels more than 60,000 nautical miles around the world each year. The University of Virginia in Charlottesville serves as the program's academic sponsor.

Over its 48-year history, Semester at Sea has made 105 voyages and has achieved a number of significant milestones, including groundbreaking visits to countries such as the former Soviet Union, China, Vietnam, Cuba, and Myanmar. Participants have met with prominent leaders including Fidel Castro, Anwar Sadat, Indira Gandhi, Mikhail Gorbachev, Corazon Aquino, Sidi Mohammed, Mother Teresa, Bishop Desmond Tutu, and Nelson Mandela.

During their three-day stay in Bulgaria, Semester at Sea faculty will lead student field trips to help students learn about the nation's history, to interact with local people, and to get acquainted with important elements of its culture, arts, and heritage sites. Field trips will include an intercultural visit to the Roma community in Balchik, attending the Varna Summer International Music Festival, visiting the Rila Monastery, the capital Sofia, and an excursion to the ancient and significant city of Plovdiv.

Semester at Sea has visited Varna, Bulgaria on previous occasions, most recently on the Summer 2009 voyage.