Shooting Survivors Convinced There Were 2 Gunmen on Norway's Utoya Island 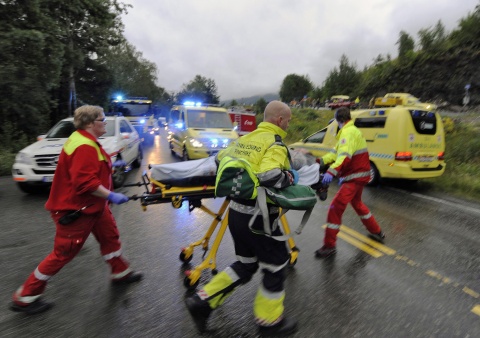 Norwegian rescue personnel take away an injured person that was brought ashore from a camp site at Utoya island near Oslo, early 23 July 2011. EPA/BGNES

Eyewitnesses of Friday's shooting rampage on Norway's Utoya Island, which occurred shortly after the bomb attack in downtown Oslo, are convinced that there were two gunmen on the island.

The unconfirmed eyewitness accounts have been quoted by the Norwegian newspaper VG, as cited by the BBC, after early Saturday Norway's police said they had arrested only one suspect for both the bomb attack and the shooting spree, 32-year-old Anders Behring Breivik.

Breivik, described as a right-wing Christian fundamentalist, was reportedly dressed in a police uniform when he opened fire on the teenagers at the youth camp on the Utoya Island.

The shooting survivors quoted by the VG paper, however, are convinced that there was a second shooter on the island. They claim that they saw another man shooting at them who was not wearing a police uniform, and that they heard firing from two sides. Their accounts remain unconfirmed.