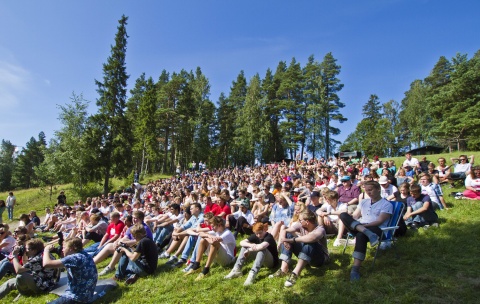 A picture dated 21 July 2011 shows participants of a political youth camp on the island of Utoya, Norway. At least 84 of the camp participants were murdered the following day in the shooting spree. EPA/BGNES

At least 91 people have been killed in the twin terrorist attacks in and near Norway's capital Oslo that shocked the world on Friday, the Norwegian police announced Saturday as they revealed the identity of the arrested suspect.

32-year-old Anders Behring Breivik, a man described as a right-wing Christian fundamentalist has been captured over the two terrorist attacks that shocked Norway.

Latest data indicates that Breivik killed at least 84 people, mostly teenagers, in his shooting rampage on the Utoya Island where Norway's ruling Labor Party held a youth camp, and another 7 people in the bomb attack in downtown Oslo.

While the police have refused to speculate about the suspect's motives at this stage, they said that he appeared to be a right-wing Christian fundamentalist based on his Facebook and Twitter accounts. Police said Breivik will face terrorism charges that carry a prison sentence of up to 21 years.

The death toll in Norway's terrorist attacks could rise as a large number of persons have been wounded in both the explosions in Oslo and Breivik's shooting rampage on the Utoya Island.