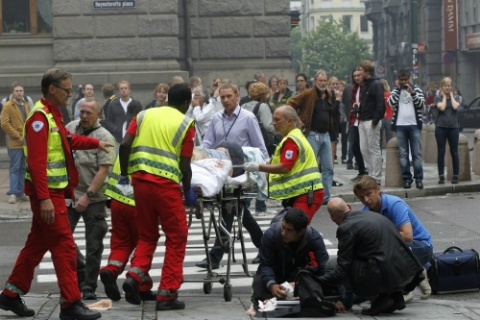 At least 87 people have been killed in the twin terrorist attacks in and near Norway's capital Oslo that shocked the world on Friday, according to latest data as of early Saturday morning.

A gunman disguised as a policeman who opened fire at a Labor Party youth camp on the island on Utoya 50 km away from Olso has killed at least 80 people, the BBC reported.

A 32-year-old Norwegian man has been arrested on the island for shooting at the teenagers. Earlier reports put the death toll on the island of Utoya at 10.

The Oslo bomb attack that occurred in the city downtown at about 3:30 pm CET on Friday killed at least seven people. Norway's Prime Minister Jens Stoltenberg, whose offices were among those badly hit by the blast, described the attacks as "bloody and cowardly".

No group has claimed responsibility for the attack but the suspect is reported to have had links with right-wing extremists, the BBC says, citing Norwegian media.

Eyewitnesses described how a tall, blonde man dressed as a policeman opened fire indiscriminately, prompting camp attendees to jump into the water to try and escape the hail of bullets.

Police warned the death toll may rise further as rescue teams continued to scour the waters around the island.

The gunman is reported to have been armed with a handgun, an automatic weapon and a shotgun.

"He travelled on the ferry boat from the mainland over to that little inland island posing as a police officer, saying he was there to do research in connection with the bomb blasts," NRK journalist Ole Torp told the BBC.

"He asked people to gather round and then he started shooting, so these young people fled into the bushes and woods and some even swam off the island to get to safety."

One 15-year-old eyewitness described how she saw what she thought was a police officer open fire.

Norwegian PM Stoltenberg had been due to visit the camp on Saturday. Foreign Minister Jonas Gahr Store, who visited the camp on Thursday, praised those who were attending.

The US has condemned the "despicable acts of violence" in Oslo, while the President of the European Council, Herman Van Rompuy, said the "acts of cowardice" had no justification.