Bulgaria's No Confidence Vote Scheduled for Next Week 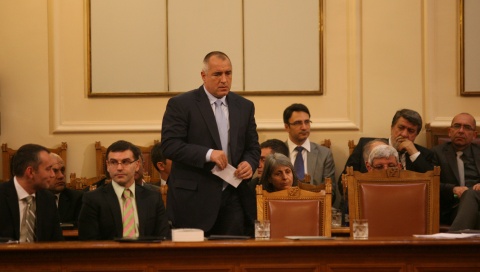 The no confidence vote against PM Boyko Borisov's cabinet is to take place next week. Photo by BGNES

The debate for the upcoming no confidence vote against the centrist-right GERB's minority government in Bulgaria will take place next Monday, while the vote itself is scheduled for Tuesday.

The no confidence vote over what has been perceived as failure in the sphere of home affairs , as well as the country's delay in joining the Schengen Area, has been initiated by the opposition, led by the leftist Bulgarian Socialist Party and the ethnic Turkish Movement for Rights and Freedoms.

The right-wing Blue Coalition, which used to back the Borisov Cabinet, has declared it will support the no confidence vote over what it regards as personal failures of Interior Minister Tsvetan Tsvetanov. The conservative Order, Law and Justice Party, RZS, is also backing the vote.

Early on Tuesday, two bombs went off in Sofia, one in front of the RZS headquarters in downtown Sofia, and one in front of an office of the Democrats for Strong Bulgaria party, a part of the Blue Coalition.

In order for the vote to pass, 121 Members of the Parliament (half of all 240 plus 1) have to vote for. GERB has 117 MPs. The 18 independent MPs, who left RZS, Ataka and the Blue Coalition have declared they will vote against, giving GERB the comfort of over 130 votes.