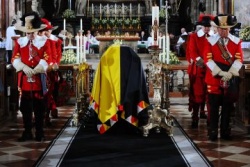 The funeral ceremony for Otto von Habsburg at Saint Stephans Cathedral on July 16, 2011 in Vienna, Austria. Photo by Getty Images

Von Habsburg passed away at the age of 98 on July the 4th.

Otto von Habsburg was born November 20, 1912 in Wartholz Castle, Lower Austria. He did not succeed his father Karl I as the Emperor of Austro-Hungary, as the empire fell apart at the end of World War I in 1919.

Initially, he lived in exile with his father and family, but then returned to his home country in 1966.

In 1978 he received German citizenship and became a member and activist of the conservative Christian-Social Union (CSU).

Otto von Habsburg was a passionate advocate of the notion of a unified Europe and served as MEP for two decades.