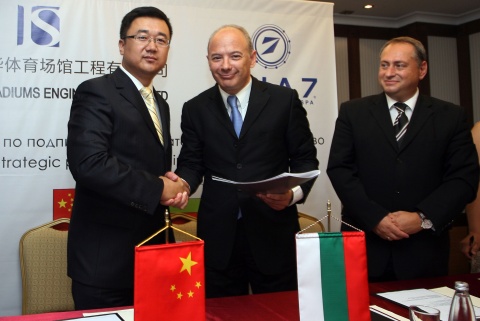 Thus, Nola 7 will become the first Bulgarian company whose spa and wellness facilities have reached China.

"We earned the trust of our partners from Beijing LSJH with our successful projects in more than eight countries in Europe, Asia and Africa," Ivan Tanev, Nola 7's CEO, said during the agreement's signing.

Shun Sintsun, CEO of Beijing LSJH, pointed out that Nola 7 is one of the leading European spa companies and declared he was extremely pleased by the cooperation deal.

Speaking before Novinite.com (Sofia News Agency), Shun reiterated that Bulgaria is among the leaders in Europe as far as spa design is concerned.

Established 17 years ago, Nola 7 is one of the the Balkans' largest companies for implementing pools, water parks and spa centers. It has put into operation over 3200 sites with a total capacity exceeding 750 000 cubic meters of water.