Turkish Company with Hefty Fine over Toxic Spill in Bulgaria 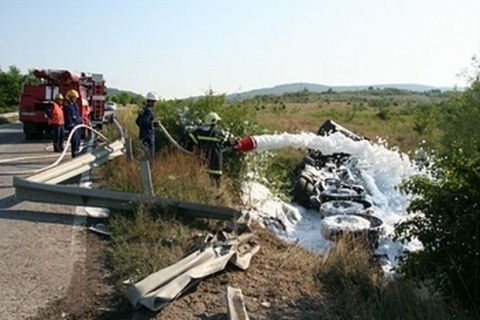 Firefighters and the Civil Defense team worked for 18 hours to secure and remove the overturned Turkish cistern. Photo by BGNES

The Regional Inspectorate for Environment and Waters in the central city of Veliko Tarnovo is fining the Turksih company "Tall Tet Global Logistics" with BGN 5 000 over the incident in Debelets.

The company is the owner of the cistern which overturned in the wee hours Monday near the town of Debelets, spilling a toxic chemical, causing the evacuation of local residents and polluting the waters of the Belitsa River.

The test results show levels of the chemical – styrene, in the waters are 18.5 higher than the norm. The river is a protected area, included in the European Natura 2000 network. The polluting is a crime, according to the Penal Code, and for this reason the Turkish company is issued the maximum sanction.

The incident happened when a Turkish cistern truck transporting amounts of a dangerous chemical rolled over, causing the evacuation of 2 200 residents of Debelets, which is located near the city of Veliko Tarnovo.

Over 4 tons of styrene, which is used to make plastic, were spilled and a toxic cloud was formed.

The Regional Governor declared an emergency situation in the town.

The driver was arrested and was kept behind bars for 24 hours. Upon expiration of the 24 hours, his ID documents have been taken away on the order of the Prosecutor's Office and under the Foreign Citizens Act, so that he cannot leave the country before the end of the investigation.

Yumer Var, a 45-year-old Turkish citizen, was charged with recklessly polluting the environment and making it harmful for people, animals and plants. Under the Penal Code he faces up to 5 years behind bars.

A probe of the Bulgarian Automobile Inspection, DAI,revealed the driver did not own a certificate allowing him to transport hazardous substances.

The probe further revealed the cistern did not have signs it contains such substances while the driver did not have a break in the last 24 hours before the incident.