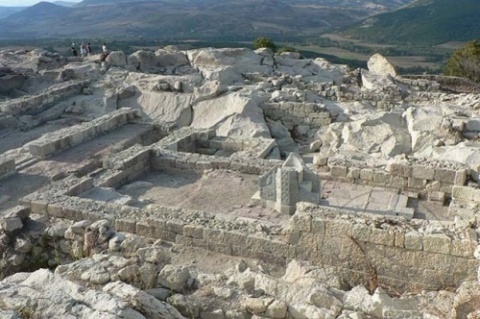 The first precious archeological finds for 2011 at the Thracian rock sanctuary Perperikon in southern Bulgaria are already a fact, according to Bulgaria's top archeologist, Prof. Nikolay Ovcharov.

The finds include a magnificent bronze cross from the 10th – 11th century, a lead medallion with a swastika and Runes' signs. Ovcharov hopes that by the end of the summer the connection between the Acropolis and the Palace-Sanctuary would be fully studied.

The Professor further explained that Finance Minister, Simeon Djankov, had requested finished projects about Perperikon and the other historical sites-winners of the top 10 Miracles of Bulgaria contest of the Bulgarian daily Standard.

The Thracian city of Perperikon is an ancient archaeological complex, located 15 km north of the city of Kardzhali. It is believed to be site of the sanctuary of god Dionysus which was widely known in the ancient world.

Human activity at Perperikon dates back to 5 000 BC, and in the Middle Age the former ancient sanctuary became a key fortress controlling the Eastern Rhodoppe Mountains.