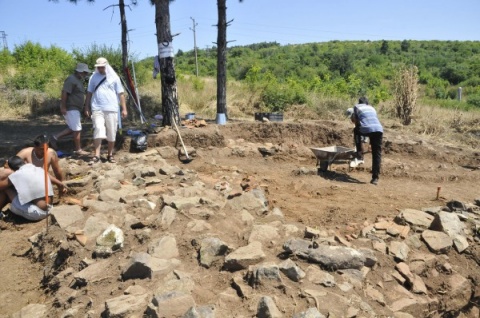 Bulgarian and French archaeologists are excavating a villa outside of the Greek polis of Apollonia (Sozopol). Photo by Bulphoto

Bulgarian archaeologists have discovered 30 bronze coins with images of Ancient Greek god Apollo dating back to the 4th-3rd century BC.

The discovery was made during excavations on the St. Marina hill near the Black Sea town of Sozopol, Burgas24 reported.

The bronze coins feature Apollo's head on one side, and on the other – Apollo sitting on an omphalos – an ancient religious stone artifact considered the center of the universe.

The coins, which are typical of the Hellenic Age, have been found in the remains of a villa from the 4th-3rd century BC outside of the Greek polis of Apollonia, today's Sozopol. The villa is the first such archaeological structure outside the polis.

The excavations at the St. Marina hill first started back in 2010 within a Bulgarian-French project called Apollonia-Pont-Euxin, French for the Ancient Greek name of the Black Sea, Euxeinos Pontos.

The aim of the project is to create a map of archaeological sites from the Ropotamo River in the south to Cape Atiya in the Sozopol municipality.

The excavations near Sozopol are headed by French archaeologist Alexander Bearlice from the Aix-Marseilles Univerisity, Kristina Panayotova from the Bulgarian National Archaeology Institute, Martin Gyuzelev, and Dimitar Nedev from the Archaeology Museum in Sozopol.