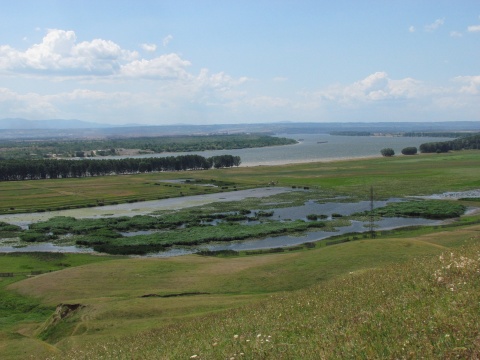 The Danube River is the natural border between Bulgaria and Romania. Photo by BGNES

Romanian pirates have attacked by boats the Bulgarian ship "St Apostol Andrey" at the 128th kilometer on the Danube river.

The Bulgarian daily "Trud" (Labor) cites the captain of the ship, Nencho Anchev, who says 1 ton of barley from the cargo has been stolen.

The incident happened late Sunday night, neat the Romanian city of Braila, where the ship came to anchor. The crew noticed the loss in the morning.

"No one heart anything during the night. It is just three of us working 12-hour shifts, so we do not have a night guard," Anchev says.

The border police cutter arrived Monday morning and investigated for three hours, but did not find anything because, according to the Bulgarian captain, the Romanian boats were unregistered.

Anchev further voices outrage that the European Commission is pouring money in border police cutters for Romania all while the Danube River remains unprotected from pirates' raids, adding such incidents were common occurrence.

The captain stresses the Bulgarian police must interfere and force Romanians to register their boats.