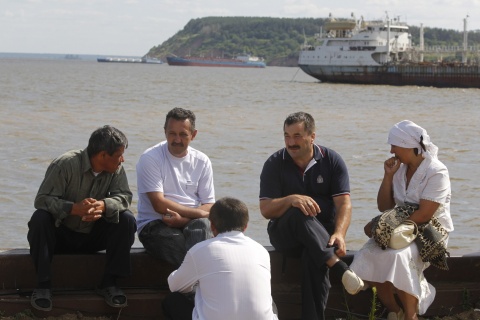 Relatives of passengers of the cruise ship `Bulgaria` which sank 10 July wait for any news on the banks of Volga river near Kamskoye Ustye village, some 150 km from Kazan, Republic of Tatarstan, Russia, 11 July 2011. Photo by EPA/BGNES

A day of national mourning is held in Russia Tuesday after a cruise ship with 208 passengers sank in the Republic of Tatarstan drowning dozens of people Sunday, including many children.

Seventy-nine people have been rescued, and Russian authorities admitted on Monday that there was little hope of finding any more survivors.

"A lot of our people have lost their lives. I want to express my condolences to the victims' families. As for the sunken vessel's fate, I think we do indeed need to raise the ship in order to fully investigate the circumstances of this tragedy," Russian President Dmitry Medvedev said, as cited by Voice of Russia.

Medvedev pointed out that too many old and dangerous ships sailing the Russian waters, stating quick measures had to be taken to ensure the greater safety of the passengers.

Prime Minister Vladimir Putin said he deeply regretted the tragedy and also expressed condolences to the families of the victims.