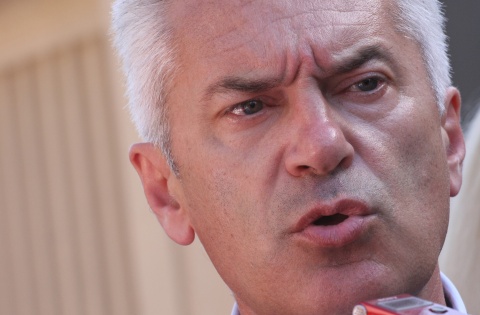 Bulgaria's nationalist leader, Volen Siderov, says he is dropping support for the ruling GERB because he realized the latter would not bring changes in the country. Photo by BGNES

The far-right, nationalist Ataka party is dropping its two-year long and unwavering support for the cabinet "Borisov," according to party leader, Volen Siderov.

In a Monday interview for the Bulgarian National Television, BNT, Siderov declared the Nationalists are now officially against the politics of the ruling Citizens for European Development of Bulgaria, GERB, party.

The Ataka leader explained his now-former support with the belief GERB would change the country's politics and said he was withdrawing this support because it finally became clear they failed in it.

Siderov explained the mass defection of Members of the Parliament from Ataka with the approaching fall presidential and local elections, saying the defection aims at making him angry and loosing ground.

"But I have not lost ground. I am focusing on my campaign," the Nationalist, who was the first one in Bulgaria to officially declare his bid for the President's Office, declared.

"Is seems that the ruling party does not want Ataka to have a good image and to be progressing. This defection is not friendly fire, but I am an old warrior; I have survived many things," Siderov said.