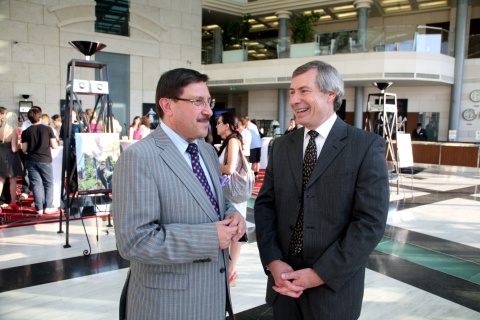 Bulgarian PR guru Maxim Behar has unveiled a unique photo exhibit in Sofia dedicated to his participation in the Cannes Film Festival together with actress Teodora Duhovnikova.

In May 2011, Maxim Behar, who is the CEO of M3 Communications Group, Inc., the largest Bulgarian PR agency, and revered Bulgarian actress Teodora Duhovnikova, became the first two Bulgarians ever to step onto the red carpet, a venue traditionally reserved exclusively for the Golden Palm nominees.

The latest of Behar's exhibits – now on display at the Hilton Sofia – contains 25 photos that he took during his 40-hour stay in Cannes, thus presenting the city during the Festival but "off the red carpet."

"I know that Cannes is usually associated with this marvelous and unique ceremony – the walk on the red carpet – but I also wanted to show the other life, the daily life going on in the city at the same time. It is no less interesting but it is hard to capture or is often neglected, which is why it cannot be seen on the TV screen," Behar stated as he inaugurated the exhibit.

Its opening was attended by a number of formal guests and friends, including US Ambassador in Sofia James Warlick and David Weissman, Cultural Attache of the French Embassy in Sofia, who were impressed with the author's ability to capture on camera elusive but intriguing details.

Maxim Behar's photo exhibit of Cannes will be on display at the Hilton Sofia; many of them have already been purchased as part of a sale whose returns will be provided to support the further education of Bulgarian math wonderkid Radko Kotev.

For their participation at the 2011 Cannes Festival, Behar and Duhovnikova brought from Bulgaria a special gift for actor Robert De Niro, who presided over this year's jury. It re-produces the work of Bulgarian math wonderkid Radko Kotev, who recently solved the ancient geometrical problem of Apollonius in a way no other mathematician has ever done. The young Bulgarian's solution is only the fifth known in history. As of the fall of 2011, Kotev, a student from the Sofia mathematics high school, is going to continue his education at the University of Edinburgh.

The exhibit dedicated to Cannes is Maxim Behar's fifth photo exhibit in the recent years. He has already unveiled two exhibits dedicated to his favorite Seychelles, whose Honorary Consul he is in Bulgaria, and to Finland and Sweden. All of the photos have been sold for charity.

Behar and Duhovnikova participated in the final two days of the Cannes Film Festival as ambassadors of Bulgaria at the invitation of the organizers and Chivas Regal, the exclusive partner of the Cannes Festival.

Each year Chivas Regal organizes an elite event in a specially selected house, to which popular personalities from around the world are invited. They are selected for being opinion leaders in their country. The initiative aims the preservation and fostering of values such as chivalry, honor, and dignity.