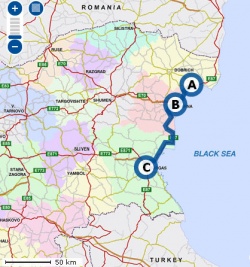 Bulgaria's Black Sea coast, the country's top tourist region, currently has two international airpots - Varna Airport (Point B) and Burgas Airport (Point C), standing at a distance of 130 km by car from one another. The future Balchik Airport is located 4

Bulgaria's Cabinet is going to invest BGN 30 M in the reconstruction of the military airport near the Black Sea resort of Balchik in order to transform it into a civilian airport.

According to the transcript of the Bulgarian government's meeting on Wednesday, which was released Friday, Prime Minister Boyko Borisov ordered the Finance Ministry to allocated BGN 30 M for the reconstruction of the Balchik Airport for civilian purposes.

Borisov's rationale is that the reconstruction will be the fastest way to make the Balchik Airport fit for being granted on a concession.

The other major argument of the Bulgarian Prime Minister to pour money into the airport near Balchik, which is located about 40 km north of the Black Sea city of Varna and the Varna International Airport is that Northeastern Bulgaria has no alternative airport, and Varna Airport has a monopoly in the region.

According to the transcript of the government's meeting, Deputy Finance Minister Vladislav Goranov argues the Balchik Airport needs to be granted on concession as quickly as possible. Transport Minister Ivaylo Moskovski, however, disagrees saying that it has to be renovated first before it can seek to attract concessionaires.

It is him who mentions that according to the Civilian Aviation Administration Directorate of the Transport Ministry BGN 30 M will be needed to reconstruct the Balchik Airport so that it can be fit for the same time of airplanes that use the Varna International Airport.

"We talked with Mr. Goranov, and this seems like it will be a rather burdensome commitment for the state budget," Moskovski says.

This, however, angers Prime Minister Borisov who is convinced that the investment will be returned by the concessionaire subsequently.

"You are telling me that we don't have a reserve of BGN 30 M that we can invest to create an airport so that we can get this money back from whoever is going to manage it? Is that what you are telling me? I don't want any comments any more! I want this airport to function in the spring, in May, I want it to be ready to function for the next tourist season. And also, the military should be able to use it as well," Borisov declares to his ministers.

The Prime Minister believes that the Balchik Airport was deliberately kept from running civilian flights so that the Varna Airport can have a monopoly and all tourists for the northern Bulgarian Black Sea resorts have to go through there.

After Defense Minister Anyu Angelov objects to this conclusion, he suffers criticism on part of Borisov.

"First, this airport is all covered in weed, and is not maintained in any way. I deliberately landed on it once, the plane was going to fall apart. So the military must not speak about how this is a very important spare airport for them, etc. Because under the Bulgarian Constitution the military can use any airport they wish," Borisov states.

Borisov further orders the Transport Ministry and the Finance Ministry to hammer out the parameters for reconstruction spending for the Balchik Airport and for the future concession.

"I want this to be a civilian airport, to be used by the big flight operators which will bring more tourists to Northern Bulgaria – how can I put it more clearly?" the PM argues.

The Borisov government decided Wednesday to transfer the ownership of the Balchik Airport from the Defense Ministry to the Transport Ministry, acting in accordance that Prime Minister Boyko Borisov made in a nearby town, Kavarna, in early June 2011.

The Balchik Airport is supposed to help boost the development of Northeastern Bulgaria, according PM Borisov.

"I hope that we will also manage to fix the situation with the airport in the town of Balchik, and I think the state will do this, and we will give a chance for the business north of Varna for better communications," the Prime Minister said in Kavarna in early June, when he promised that it will be turned into a civilian port to be used for tourist flight, and that it will be granted on a concession shortly.

The Borisov Cabinet has recently revamped measures to revive several defunct airports around Bulgaria – including the Gorna Oryahovitsa Airport near Veliko Tarnovo, and the Straklevo Airport near Ruse; defunct airports in other locations such as Targovishte and Vidin could also be put on the table in the months to come.

For the time being, it is still unclear how much investor interest such airport projects could generate.