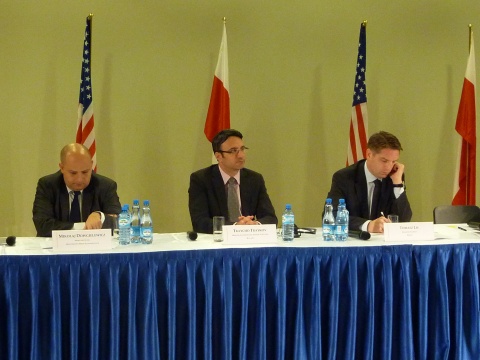 Bulgarian Minister of Energy Traicho Traikov at a forum on the production of shale gas in Warsaw, Poland, May 2011. Photo by BGNES

Bulgaria is making definite steps to achieve a fourfold reduction in the amount of natural gas it is buying from Russia, according to an extensive publication by Russian paper Kommersant.

Looking at boosting its own gas production, but also at diversifying imports, Bulgaria hopes to achieve a reduction from the 2 B cubic meters of gas it buys from Russia per annum, to some 500 M cub.m in 2-3 years.

Bulgarian Minister of Economy and Energy has already declared Bulgaria's intention to give up on long-term contracts with Russian gas giant Gazprom in a bid to give his country more leeway in negotiating terms and prices.

Among recent developments, the Bulgarian state's commitment to exploring for shale gas on its territory is seen as a pressure against Gazprom.

Recently US energy giant Chevron receved a permit to explore for shale gas in the north east part of the country, at a site that is believed to contain massive amounts that could satisfy the country's gas needs for decades on.

Bulgarian-American company Direct Petroleum has already made significant findings of 10 B cub.m. shale gas in central northern Bulgaria and plans to start producing in 1-2 years at a rate of some 1 B cub.m. per annum.

Shale gas has already raised controversy in Bulgaria though, with environmentalists, local authorities and the opposition Bulgarian Socialist Party alarming about its possible negative environmental impact.

France has recently become the first country to ban the production of shale gas on its territory, and worries are rampant in the USA, the very country where the novel technique led to a revolution in the gas market.

But Bulgaria is also looking at other ways to diversify gas supply, including pushing the EU Nabucco pipeline project, set to deliver gas from the Caspian and Middle East, as well as constructing system links with neighbors Romania and Greece.

Kommersant further quotes analysts who remark that in addition Bulgaria needs to develop a competitive internal market for natural gas to achieve lower prices for consumers.

At the time being there are only two major companies who sell gas in Bulgaria, the state Bulgargaz, selling gas to industrial consumers, and Gazprom-controlled Overgas, which primarily sells gas to households.

Kommersant recalls that if those plans of Bulgaria reach fruition, that will be a second major hit against Gazprom, after Croatia has given up on its 1 B cub.m. of Russian gas at the start of 2011.

You can read the full article (in Russian) HERE.