Netanyahu Visit to Bulgaria Not Just about Palestinian Bid* 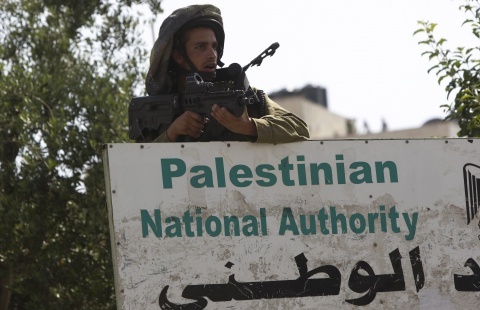 An Israeli soldier takes position behind a sign directing to the Palestinian Authority ministry of economy during an operation against Palestinian activists, in a suburb of Ramallah, 30 May 2011. EPA/BGNES

Diplomatic officials say the visit is not just about the Palestinian statehood bid, but rather a chance to promote relations and cultivate friendship.

Prime Minister Benjamin Netanyahu is scheduled to leave Wednesday morning for a trip to Romania and Bulgaria, marking the first prime ministerial visit to either of those countries in some 20 years.

While the visit has taken on increased importance in the run-up to the Palestinian statehood bid at the UN in September, diplomatic officials said the visits to Roman and Bulgaria – considered among the most friendly countries toward Israel in the EU – are not only about the PA's statehood move.

"These are countries where Israeli prime ministers don't generally travel," one official said. "It is important to promote relations with these countries. We find there is a lot of support and sympathy in Eastern Europe, and that we have natural friends there whom we want to cultivate. We want to show them we appreciate their friendship." Netanyahu will be meeting Wednesday in Romania with his counterpart Emil Boc, as well as President Traian Basescu.

The next day he will fly to Sofia for meetings with Bulgarian Prime Minister Boyko Borisov and President Georgi Parvanov. Netanyahu will be accompanied on the trip to Bulgaria by some eight ministers who will take part in a joint government meeting. He is slated to return to Israel Thursday evening.

Israel's relations with Romania and Bulgaria benefitted from the deterioration in Israel's ties with Turkey, as Israel sought to spruce up its ties with Turkey's historic rivals in the region: Greece, Cyprus, Romania and Bulgaria. Israel also was forced, as a result of the breakdown of relations with Ankara, to look elsewhere for places for the air force to train, since Turkey – which once allowed such training – closed its skies to Israeli military aircraft.

Last July an IAF helicopter on a joint training mission in Romania crashed, killing one Romanian and six IDF soldiers.

While one government official said that the purpose of the Netanyahu visit was to strengthen bilateral ties, he said that multilateral issues – such as the UN vote in September – would definitely be on the agenda.

While Romania and Bulgaria both recognized a Palestinian state in 1988 when they were under Soviet domination, Israel is trying to get them not to support the Palestinian move in September.

According to Israeli officials, Bulgarian Foreign Minister Nicolay Malenkov, during a meeting with Netanyahu in Jerusalem two weeks ago, left the impression that Bulgaria would not support the Palestinian move.

*The title has been changed by the Editorial Staff of Novinite.com