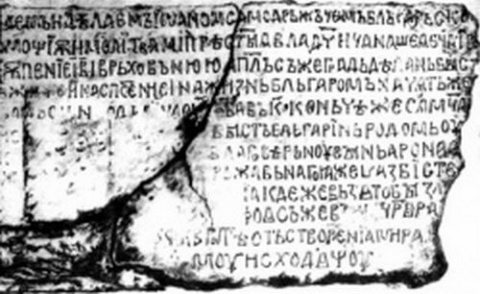 Pictured: The Bitola Inscription of Tsar Ivan Vladislav, Samuil's nephew, in which he says that the Bitola fortress near Ohrid was rebuilt in 1015-1016 "by Ivan, Tsar of Bulgaria", who was "Bulgarian by birth" and for the salvation of the Bulgarians. Pho

Bulgaria's ex Diaspora Minister Bozhidar Dimitrov has offered the Macedonian authorities to build monuments of 6 more Bulgarian rulers after in a recent nationalist spree the government in Skopje erected a monument of Bulgarian Tsar Samuil, presenting him as the head of an imagined medieval "Macedonian" state.

Dimitrov, who is a prominent historian and the Director of Bulgaria's National History Museum in Sofia, made an offer to the government of Nikola Gruevski in Macedonia Tuesday to create monuments of six Bulgarian rulers who were politically active on the territory of today's Macedonia, which back then was an important region in the First Bulgarian Empire (681 AD – 1018 AD).

The imposing monument of famed Bulgarian medieval Tsar Samuil, the greatest defender of the First Bulgarian Empire against Byzantium, was erected in the Macedonian capital Skopje a week ago. The 5-meter marble statue was placed at the central Skopje square nearby the recently ereted statue of Alexander the Great.

In the recent months, the government of Nikola Gruevski and the ruling party VMRO-DPMNE built several monuments in Skopje and other towns in Macedonia, including a statue of Alexander the Great, also imagined to have somehow been a forefather of the contemporary Macedonians. This led Greece to react harshly, with the Greek authorities declaring that Macedonia is trying to hijack parts of Greece's historical memory.

Unlike Greece, however, Bulgaria's authorities have made it clear they have decided not to react.

The monument of Tsar Samuil in Skopje is viewed as amusing by the majority of Bulgarians, with even Bozhidar Dimitrov, former Diaspora Minister in the Borisov Cabinet, initially declaring that it is great to see neighboring states erect monuments of Bulgarian tsars.

On Tuesday, however, he elaborated on his gratitude for the Macedonian government by suggesting a list of six more prominent Bulgarian rulers that should get a monument in Skopje like Tsar Samuil, who ruled the First Bulgarian Empire as the Tsar of the Bulgarians in 997 AD-1014 AD from his capital in Ohrid, in today's Macedonia.

First on the list is Khan Kuber, the brother of the founder of the First Bulgarian Empire Khan Asparuh. Back in 680 AD Kuber is believed to have founded a second Ancient Bulgarian, or Bulgar, state in the Balkans in today's Macedonia, which cooperated closely with the Slavic-Bulgarian state of Khan Asparuh, the predecessor of today's Bulgaria. Khan Kuber was known for an attempt to capture Thessaloniki in the Byzantine Empire, and for conquering territories in today's Albania, Macedonia, and Kosovo.

Second on the list for potential monuments in Skopje is Bulgaria's Khan Krum the Terrible, who ruled in 803-814 AD. Krum is believed to be a descendant of Khan Kuber's dynasty. As ruler of the First Bulgarian Empire he is known for issuing severe laws, conquering Sofia, defeating and killing Byzantine Emperor Nicephorus I, and setting up a new ruling dynasty.

The third Bulgarian medieval ruler, who deserves a monument in Macedonia, according to Dimitrov, is Knyaz (King) Boris I (r. 852-889), who made Christianity the official and only recognized religion in Bulgaria, and was instrumental in the development of the Cyrillic alphabet by sheltering and aiding the disciples of St. Cyril and St. Methodius, St. Naum and St. Kliment, who developed the Cyrillic alphabet based on the initial Glagolithic alphabet invested by St. Cyril.

Bulgaria's Tsar Roman (ruled 977-997 AD) is next on the list. Dimitrov has stressed that Tsar Roman was the first ruler to reside in Skopje, the capital of today's Macedonia, turning it into a fortified town. He is also known for founding the St. George Monastery near Skopje. While Roman mostly dealt with church matters, his general Samuil was in charge of the wars with Byzantium at the time. Roman's general Samuil proclaimed himself Tsar of the Bulgarians only after Roman died and left no heirs to the Bulgarian throne.

Fifth on the list of those deserving a monument in Skopje, according to the head of the Bulgarian National History Museum is Tsar Ivan Vladislav (r. 1015-1018), the last ruler of the First Bulgarian Empire.

One of the heaviest blow to the doctrine of so called "macedonianism" proclaiming a separate historical identity of the modern-day Macedonian nation is the Bitola Inscription of Tsar Ivan Vladislav, Samuil's nephew, in which he says that the Bitola fortress near Ohrid was rebuilt in 1015-1016 "by Ivan, Tsar of Bulgaria", who was "Bulgarian by birth" "as a haven and for the salvation of the lives of the Bulgarians."

Finally, according to Dimitrov, a ruler from the Second Bulgarian Empire (1185-1396 AD) is also on the list of the Bulgarian tsars who should get a monument in the Macedonian capital not unlike Tsar Samuil.

Bulgaria's ex Diaspora Minister Bozhidar Dimitrov has emphasized that each one on his list of six more Bulgarian Tsars that should also have monuments in Skopje is technically as deserving for the geographic region of Macedonia, which was a province of Bulgaria for the better part of the period, in the Middle Ages as is Bulgaria's Tsar Samuil.