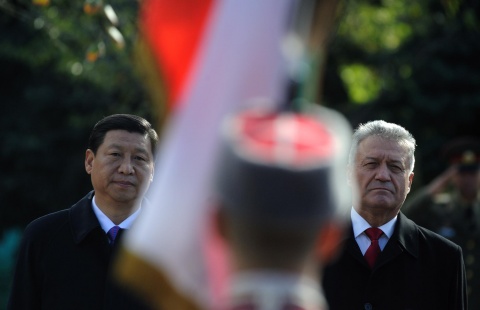 Bulgaria's Vice President Angel Marin has welcomed a delegation of Chinese journalists, using the occasion to congratulate the Chinese Communist Party on the occasion of its turning 90 on July 1, 2011.

The Chinese delegation, led by Zhu Qian, head of the section of All-China Journalists Association in Xinjiang Uyghur autonomous region of China, met with Marin on Monday. The meeting was also attended by the Chinese ambassador to Bulgaria Guo Yezhou

The Bulgarian Vice-President has congratulated China on its achievements scored under the leadership of the Communist Party of China (CPC), as cited by The China Daily.

Marin told a visiting delegation of Chinese journalists on the occasion of the 90th anniversary of CPC that although Bulgaria is far from China, the two nations together have celebrated this anniversary.

He further underlined that over the past 90 years the Chinese Communist Party has contributed much to the China's development. On the international scene, China is becoming an important force with great influence, Marin is quoted as saying.

He also said he hopes Chinese journalists would contribute to the understanding between the Bulgarian and Chinese people.