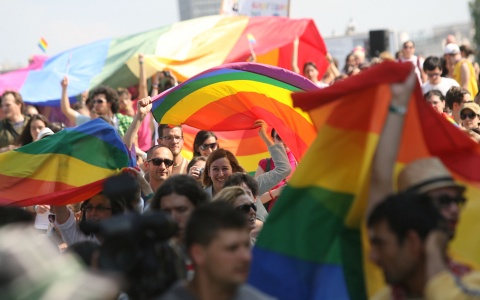 Pictured: the 4th annual Sofia Pride gay parade which took place in June 2011; the Supreme Administrative Court ruling is an important decision in favor of gay rights in Bulgaria. Photo by BGNES

Bulgaria's Supreme Administrative Court has rejected an appeal by the head of the Municipal Council in the city of Pazardzhik over a gay rights case, confirming it was a case of discrimination based on sexual orientation.

The gay rights scandal in the southern city of Pazardzhik erupted in the spring and summer of 2010 when Stefan Yanev, a local prosecutor, defended a municipal ordinance of the Pazardzhik Municipality that banned the displays of sexuality in public, which was clearly directed at gays.

Yanev reacted to an appeal to the local Prosecutor's Office issuing a position in which he upheld the notorious regulation, and even went as far as publishing his own musings on human sexuality – ridiculed by the media as a "treatise" - in which he compared homosexuality, bisexuality, and heterosexuality with pedophilia, zoophilia, gerontophilia, necrophilia, and fetishism, as he considers all of those forms of sexual orientation.

Subsequently, the problematic ordinance was repealed by the Supreme Administrative Prosecutor's Office in Sofia.

Monday's ruling by the Bulgarian Supreme Administrative Court is based on an appeal by the Chair of the City Council in Pazardzhik Georgi Yordanov, which asked for the repeal of a ruling of the Commission for Protection from Discrimination. The Commission ruled in May 2010 against the municipal ordinance of the Pazardzhik Municipality that banned the displays of sexuality in public, which stirred the scandal in the first place.

According to the Bulgarian Supreme Administrative Court, however, the Pazardzhik City Council has committed direct discrimination based on sexual orientation against the residents and visitors of the city who are not heterosexual.

"The specific ordinance studied by the Commission contains discriminatory attitude against the sexual orientation of persons who are not heterosexual. It is inadmissible that the ordinance of the local authority would defend the negative, subjective perception that has formed with its members," the three judges from the SAC ruled.

The scandal with the anti-gay initiatives in Pazardzhik grew in the fall of 2010 when the Bulgarian Orthodox Bishop of Plovdiv Nikolay, known for his radical views, presented Yanev and Pazardzhik Mayor Todor Popov with the highest order of the Plovdiv Bishopric styling them "defenders of Christian values," and calling homosexuality "travesty" and "debauchery" among other similar terms.

Monday's ruling of the Bulgarian Supreme Administrative Court, the highest-ranking institution that can issue a legally-binding ruling in Bulgaria, is now believed to have settled the legal side of the case in Pazardzhik, ruling agianst discrimination based on sexual orientation.