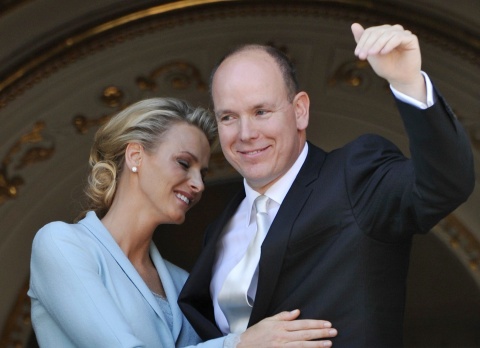 Prince Albert II of Monaco (R) is being hugged by Princess Charlene (L) while waving to the crowd from one of the Princely Palace balconies after their civil marriage ceremony performed in the Throne Room of the Palace, in Monaco, 01 July 2011. Photo by E

Monaco's Prince Albert II and South African swimmer Charlene Wittstock wedded on Friday at a lavish civil ceremony, attended by about 4,000 of guests.

The wedding will be followed a day later by a religious ceremony at the royal palace on the Mediterranean.

Charlene Wittstock, who took part in the 2000 Sydney Olympics, will become Her Serene Highness, Princess Charlene.