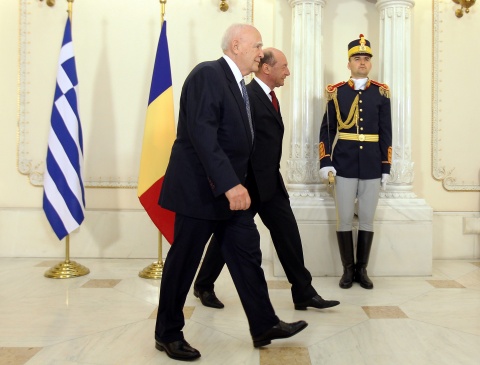 President Papoulias referred to the recently erected statue of Alexander the Great in the central square of Macedonia's capital Skopje.

Both Greece and Macedonia view Alexander as a key figure in their ancient histories and vie for his heritage.

"The government in Skopje continues to feed on nationalism. You cannot create a historic past by building monuments," argued Papoulias.

At the same time, some of the tens of thousands protesting impeding austerity measures in Greece, attempted to attack the House of Parliament and Ministry of Finance in Athens.

Tuesday Macedonia also erected a monument to medieval Bulgarian Tsar Samuil, which it considers its own ruler.

During his meeting with Romanian counterpart Traian Basescu Wednesday, Greek President Karolos Papoulias nevertheless stated that he hopes that the dispute around the name of Macedonia will be resolved "in the nearest future."