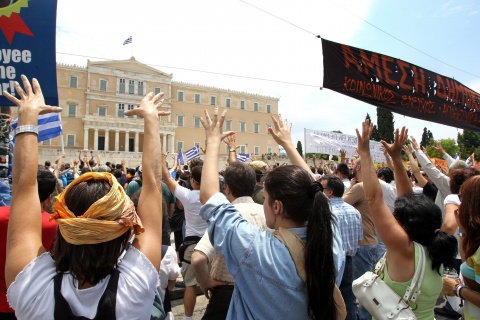 Demonstrators raise their arms and shout slogans standing opposite the Greek Parliament building (background) on the second day of the 48-hour general strike in Athens, 29 June 2011. EPA/BGNES

The Greek Parliament passed a life-saving austerity package with 155 votes for and 138 against Wednesday amid violent street protests against the measures.

Despite the popular dissent to the project, with includes over EUR 28 B worth of cuts and privatization, PM George Papandreou has staunchly defended the package and has Wednesday argued his country has "no B-plan."

Just before the vote, riot police had to use force and teargas to dispell protesters that were about to attack the house of the Greek Parliament.

Thursday MPs have to vote on specific legislative amendments to implement the different measures in the austerity package.

Greek FinMin Evangelos Venizelos stated he was confident the Thursday votes will go through.

"Wednesday an important step was made. Thursday we will make the next step and on Sunday I will be able to go to the Eurogroup meeting with proof of Greece's commitment," said Venizelos.

The implementation of the far-ranging austerity is a condition of Greece's receiving the last tranche of a life-saving EU and IMF loan to boost its wrecked finances.