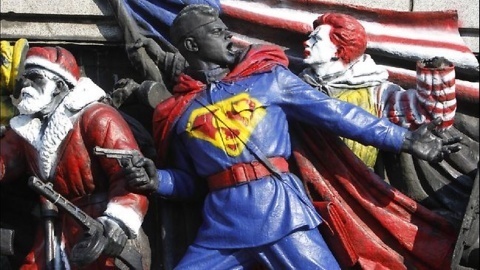 Sculptures of Soviet soldiers in the Bulgarian capital were briefly transformed into Superman, Santa Claus and Ronald McDonald. Photo from Herald Sun

The discussion scheduled Wednesday in the Bulgarian capital Sofia's municipal council on the future of the controversial Soviet Army monument failed to produce any results due to the lack of quorum.

Wednesday's hour-and-a-half-long debates on the recently defaced monument were described as "futile" and a "PR action" by some of the council's members, the Dnevnik daily reports.

After the debates, municipal council members from the rightist Blue Coalition accused their colleagues from the ruling centrist right GERB and the oppositional left-wing Bulgarian Socialist Party of deliberately leaving the discussion in order to ruin it and save the monument. The two parties were described as a "Soviet coalition" in a press release by the Blue Coalition, which used among GERB's allies after the ruling party took over in 2009, but subsequently moved into opposition.

The emergency sitting took place 10 days after an unknown artist stirred the spirits in the Balkan country and caught the attention of the top global media, painting the Soviet Army Monument's soldier figures to ironically represent a set of US pop culture characters.

The unknown street artist painted the bronze figures of Soviet soldiers in downtown Sofia, turning them into various US superhero and other pop culture characters – including The Joker, Wolverine, Santa, Superman, Ronald McDonald, Captain America, Robin, and Wonder Woman.

The emergency overnight cleaning of the monument, organized not by the municipality, but the little known forum "Bulgaria-Russia", chaired by Svetlana Sharenkova, triggered a wave of angry comments on the Internet.

Meanwhile, the Bulgarian Helsinki Committee, the Sofia Poetics organization (which organizes the eponymous yearly poetry festival in the Bulgarian capital) and the "Transformers" art movement scheduled a public discussion regarding the monument's future, also on Wednesday.