Ode to the Righteous Bulgarian Gentiles 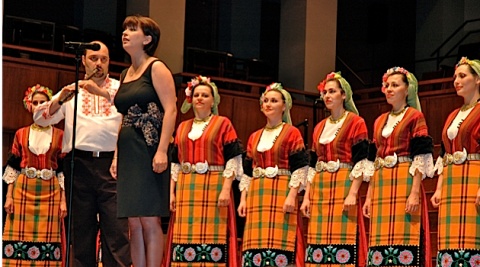 from the Jewish Daily Forward

When several trains entered Bulgaria secretly on March 8, 1943, to deport 8,000 Jews to Polish concentration camps, the Bulgarian Parliament, the Eastern Orthodox Church and the Bulgarian people opposed the anti-Semitic plot so vehemently that Nazi-sympathetic Alexander Belev, chairman of the Commissariat for Jewish Affairs, had to back down. Other attempts to deport Jews from Bulgaria were similarly thwarted. Although the 11,000 Jews in Macedonia and Thrace, which were under Bulgarian military rule, were sent to death camps, the Jews of Bulgaria — numbering nearly 50,000 — were saved.

One would expect this story to be trumpeted in Holocaust curricula at every Jewish school and plastered on the walls of every museum devoted to genocide and World War II. But the words "arcane," "little-known" and "unheralded" were frequently used to describe the story at a June 21 festival at the Kennedy Center for the Performing Arts, in Washington, D.C., which was "inspired by the heroic acts of compassion displayed by the Bulgarian people."

The Songs of Life Festival is part of the Varna International Conductors Workshop, which was founded by husband-and-wife team Kalin and Sharon Tchonev. According to the festival website, Kalin, who is Bulgarian born, and Sharon, a native of Israel whose maternal grandparents were among the Bulgarian survivors, formed Songs of Life "to champion the principles of tolerance in the midst of diversity and bravery in the face of prejudice."

The first half of the festival featured a mix of about 15 short a cappella pieces, including the premiere of Charles David Osborne's Talmud-inspired "Whosoever Saves a Single Life." The repertoire included such meditative religious works as Dan Forest's Psalm 8 ("Adonai, Adonenu"), Zolt?n Kod?ly's arrangement of "Ave Maria" and Zden?k Luk??'s scoring of "Agnus Dei", as well as the unlikely sequence of Armenian folk song "Loosin Yelav," followed by Richard Rodgers and Oscar Hammerstein II's more upbeat "A Grand Night for Singing." To bring an authentic sound to the proceedings, singers from the Philip Kutev National Folklore Ensemble, based in Sofia, sang three traditional Bulgarian folk songs.

The second half of the concert provided the tour de force: the world premiere of the oratorio "A Melancholy Beauty," composed by the Bulgarian-born Georgi Andreev and conducted by Henry Leck, director of choral activities at Butler University. The oratorio, which was subsequently performed at Boston's Wang Theatre on June 23 and at New York City's Lincoln Center on June 26, featured about 250 singers and musicians from several groups, including the Indianapolis Children's Choir, of which Leck is founder and artistic director.

The libretto by poet Scott Cairns and Aryeh Finklestein, cantor at Congregation Mishkan Tefila in Chestnut Hill, Mass., spans seven and a half two-columned pages in the playbill and poetically tells the story of Liliana Panitza, secretary and lover of the anti-Semitic commissar. She alerted the Bulgarian rabbis about the plans to deport Bulgaria's Jews. Confronted by a tough choice between the man she loved and her values, Lily — beautifully sung by Bulgarian soprano Neli Atanasova Andreeva — decided to do the right thing. She says: "My lover, my commissar, you have grown small. So small, and so zealous, I don't recognize you." She continues: "And what of these others, our neighbors, our countrymen?... I cannot forsake them, no, not a one of them. I shall warn, warn them all, of this cruel plan."

Under pressure from the Bulgarian people and the Eastern Orthodox Church, the deportation plans had to be scrapped, but that news didn't reach the Bulgarian city of Plovdiv. When the head priest of the church, Metropolitan Kiril, heard that the Jews of his city were imprisoned in a barbed wire enclosure, he forced himself past Nazi guards to join the imprisoned Jews. Quoting the Book of Ruth, he said, "Your nation is my nation, and your people are my people."

The libretto captures an impressive range of emotions: from the Bulgarian people, who emphatically insist, "This law is foreign to our own wise laws, denies the very good for which our Folk song and symphonic music are combined into a dramatic oratorio. nation's fathers — the Christians and the Jews — have shed their blood," to their monarch, King Boris III, who chooses to outwardly support the Nazis' plans he opposes. "I must find a way to seem still to be king," he says. According to Dan Mariaschin, executive vice president of B'nai B'rith International, the politics surrounding the country have contributed to the story's obscurity.

"I think that Bulgaria's being under Communist rule for 44 years contributed to its rescue story not being widely told, or known," said Mariaschin, whose organization published the 2005 book "The Power of Civil Society in a Time of Genocide" with the Bulgaria-based Sofia University. "As a child, I heard about it from my mother, who had a cousin in Israel married to a Bulgarian Jew, who arrived in pre-state Israel in the '30s. But I would assume we were probably in a minority of Jews who had heard of this." Since Bulgaria joined NATO and the European Union, the story is better known now, Mariaschin said, particularly with the "immense interest" today in Jewish communities of former Eastern Europe, "but still not as widely known as it could be."

Stan Engebretson, director of choral studies at George Mason University and artistic director of the National Philharmonic Chorale, participated in the performance with singers from both the chorale and George Mason. He has worked with Varna in the past, and heard about the history of Bulgaria's Jews from Kalin Tchonev. "Musically the composer has masterfully combined folk song with full symphonic music into a dramatic oratorio," Tchonev said. "Elements of gypsy music and Hebrew dance blend seamlessly with popular song and large full symphonic forces of almost 300 in the finale. It is hair raising at times, poignant at others, dance-like in a folk manner in places."

Asked if it was unusual to hear folk music performed on such a grand scale, Engebretson cited such composers as Aaron Copland and Anton?n Dvo??k. "What is unique is to import the authentic groups, however, as they have a special sound in their tone," he said, "very bright and forward sound singing in Bulgarian for the singers, and the use of plucked instruments similar to lutes and guitars in the ethnic dance instruments."

Swiss ethnomusicologist Marcel Cellier is credited with bringing Bulgarian music to Western audiences through the release on his label, Disques Cellier, of "Le Myst?re des Voix Bulgares" ("The Mystery of Bulgarian Voices") in 1975. "Songs of Life" is not the first to venture into the realm of Bulgarian-Jewish music. Bulgarian ethnomusicologist Nikolai Kaufmann, who arranged thousands of Jewish and Bulgarian songs, some of which were featured in "Le Myst?re des Voix Bulgares," released the album "Jewish Songs From Bulgaria" in 1994.

But Songs of Life is appropriately packed with Christian music. The performance is focused on the ways so-called righteous gentiles protected their Jewish neighbors. That's what makes the festival most compelling. It's not merely an opportunity to hear Bulgarian music, and it's not even just a chance to hear lyrical responses to the Holocaust. The Tchonevs' contribution is to use living Bulgarian music to celebrate and represent a heroic chapter in the Bulgarian story of the Eastern Orthodox Church.