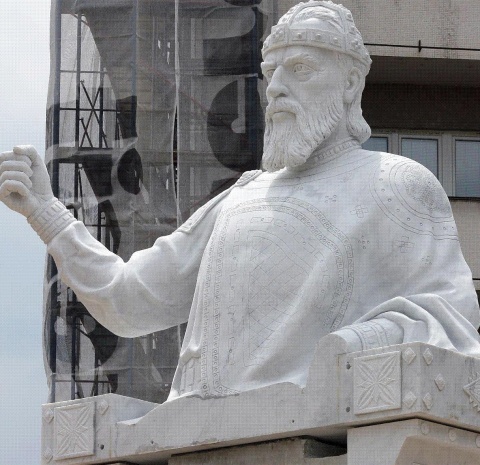 The marble statue of medieval Bulgarian Tsar Samuil that was erected Tuesday at the Skopje central square. Photo by BGNES

The 5-meter marble statue was placed at the central Skopje square nearby the recently ereted statue of Alexander the Great.

Tsar Samuil (Samuel) ruled the First Bulgarian Empire as the Tsar of the Bulgarians in 997 AD-1014 AD from his capital in Ohrid, in today's Macedonia.

The center of Bulgarian power shifted from the old capital of Preslav to Skopje and Ohrid following the Byzantine takeover of Preslav and parts of Eastern Bulgaria in 971.

Samuil fought a heavy battle to ward off an incipient Byzantine appetite to run over the First Bulgarian Empire (681 AD-1018 AD).

As a general for preceding Bulgarian Tsar Roman (Tsar of the Bulgarians in 977 AD-997 AD, dying withouth any heirs), he dealt a devastating blow to the Byzantine army at Gates of Trajan Pass in 986 AD. In addition to being an outstanding defender of the Bulgarian state, Samuil is known for the fact that he was unwilling to proclaim himself Tsar of the First Bulgarian Empire as long as there was a living descendant of the original dynasty, even when Tsar Boris II (r. 970-977) and his brother Roman were in captivity in Constantinople. Samuil took over as Tsar only after the death of both brothers who had no male descendants.

The tides of the war between the First Bulgarian Empire and the Eastern Roman Empire (Byzantium) turned in 1014 though, when Byzantine Emperor Basil II extracted revenge by defeating the Bulgarian army at the Battle of Kleidon, capturing 15,000 Bulgarian soldiers, having them blinded, and sending them off home, a sight which caused the death of Tsar Samuil.

One of the heaviest blow to the doctrine of so called "macedonianism" proclaiming a separate historical identity of the modern-day Macedonian nation is the Bitola Inscription of Tsar Ivan Vladislav, Samuil's nephew, in which he says that the Bitola fortress near Ohrid was rebuilt in 1015-1016 “by Ivan, Tsar of Bulgaria”, who was “Bulgarian by birth” “as a haven and for the salvation of the lives of the Bulgarians."