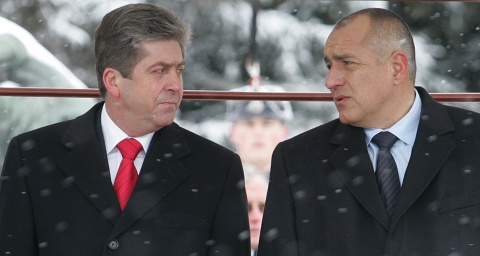 Tensions between Bulgarian President Georgi Parvanov (L) and PM Boyko Borisov (R) are seen as one of key factors contributing to the worsening of democracy in the country in a Freedom House study for 2010. Photo by BGNES

Bulgaria's "National Democratic Governance" index in the Freedom House "Nations in Transition" study has declined due to "exacerbated partizanship and questionable moves on the part of key actors".

Other indexes in the report, such as "Civil society," "Independence of media," and "Judicial Framework," have retained their levels as of the preceding year.

As chief grounds for the drop in the democratic governance indicator, the authors primarily cite infighting between Bulgaria's President Georgi Parvanov and PM Boyko Borisov's GERB cabinet, which is seen to create instability.

Further grounds are seen in questionable high-profile appointments and dismissals in the government and other areas of the civil service.

A special attention is given to President Parvanov's founding of the civic movement ABV, which is interpreted as overstepping the constitutional presidential powers.

The section on Bulgaria of the Freedom House "Nations in Transition 2011" report is authored by Daniel Smilov and Georgy Ganev of the Center for Liberal Strategies.

You can read it in full HERE.