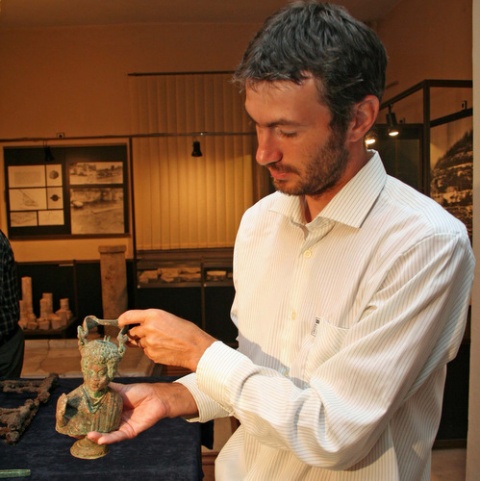 Archaeologist Nikola Rusev shows the finds from the intact Thracian burial mound that he discovered, including the balsamarium in the form of a human figure. Photo by BGNES

An intact Ancient Thracian tomb which has not been destroyed by treasure hunters has been discovered by a team of Bulgarian archaeologists near the town of Opaka in northeast Bulgaria.

The tomb of a Thracian dignitary is dated to the 2nd century BC, and was discovered by the team of archaeologist Nikola Rusev from the History Museum in the town of Popovo, Targovishte District.

One of the most startling discoveries in the newly-found Thracian tomb are six leafs made of gold, part of a golden wreath, together with other golden and bronze decorations, pottery, and glass and bronze cosmetic vessels. Another unique find is a human-shaped balsamarium, small container for incense or perfume often made in the form of a grotesque figure.

"These items were most likely produced outside of the territory of today's Bulgaria and were then imported. It is safe to say that they were luxury products," said archaeologist Nikola Rusev, as cited by bTV.

Newly-uncovered Thracian tombs in Bulgaria are becoming increasingly rare as many of them have been damaged by treasure hunters even before archaeologists can reach them.