Bulgaria Halfway to Banning Ex Spies from Serving as Ambassadors 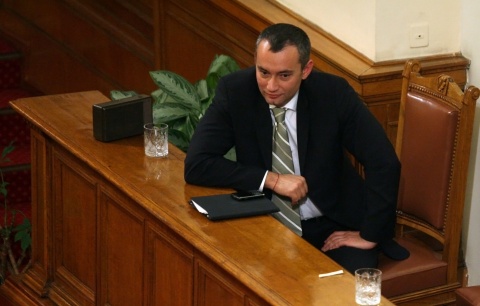 Bulgaria's 35 ambassadors proven to have been collaborators of the communist regime's secret service will be removed from their posts, according amendments to the Diplomatic Service Act adopted by the Parliament at first reading.

The much anticipated but still controversial "diplomatic lustration" legislation championed by Foreign Minister Nikolay Mladenov was adopted Thursday with 92 votes in favor – cast by MPs from the ruling center-right party GERB and the rightist Blue Coalition, 21 votes against – cast by the Bulgarian Socialist Party, and 13 abstaining – from the ethnic Turkish party DPS (Movement for Rights and Freedoms) and the nationalist party Ataka.

The amendments initiated by Foreign Minister Nikolay Mladenov are also designed to prohibit any collaborators – including intelligence officers and secret informers – of the so called State Security (DS), the intelligence and secret police service of the Bulgarian communist regime before 1989.

The legal amendments initiated by Mladenov are supposed to rectify the huge scandal that shook the Bulgarian government in the fall of 2010 with regards to the diplomats' lustration (i.e. limiting the participation of former communists, and especially informants of the communist secret police in the civil service). The Foreign Minister was outrage after at the end of 2010 the so-called Files Commission, the special panel examining the Communist era documentation, revealed that almost half of Bulgaria's diplomats abroad had been collaborators of the former State Security Service.

Under the provisions of the Diplomatic Service Act, the former communist secret service spies, collaborators, intelligence officers, and informers who now occupy senior diplomatic positions will be removed and appointed to other posts within the diplomatic corps.

New recruits of the Bulgarian diplomatic service will be required to submit a written confirmation that they agree to be inspected of any prior affiliation with the DS.

"The amendments are aimed at protecting the Bulgarian state from the inconvenience of explaining to the world why we have sent as our representatives people whose files can be read online making it clear how long they worked precisely against the country in which they are currently accredited," explained Foreign Minister Mladenov.

"In the past 20 years 40% of the Bulgarian ambassadors were full-time or part-time employees of the DS or the intelligence service of the Bulgarian People's Army. We cannot be the only nation in Central and Eastern Europe which has not found out the answer to the question of how to terminate these connections," Mladenov said.

"There is no way a former collaborator of the former state security could represent Bulgaria in NATO. I am even surprised by these people, they should not even want to work for the state. It is totally incorrect to see them trying to serve a new cause. Our country has a new way, our country has new geopolitics," former Prime Minister and Blue Coalition Co-Chair Ivan Kostov said in support of the lustration legislation.

Foreign Minister Nikolay Mladenov has defended the new legislation as "the best balance that can be found 20 years" after the start of the post-communist transition in Bulgaria.

Mladenov's bill was vehemently opposed by the Bulgarian Socialist Party, whose MP Lyuben Kornezov, a specialist of constitutional law, threatened to defeat the "diplomatic lustration" amendments in the Constitutional Court.

"If you accept this lustration law – I will overwhelm you in the Constitutional Court," Lyuben Kornezov, a MP from the Bulgarian Socialist Party, declared in Parliament Thursday threatening to kill the bill initiated by Foreign Minister Mladenov.

"This is lustration and discrimination. Everything else is a delusion," Kornezov stated regarding the proposed changes.

"I am not going to comment legally on the changes but this draft bill contradicts many rulings of the Constitutional Court, the last one from 2009, and it also contradicts the Constitution. What is more, it gets into contradiction with international agreements and law. Write them down," Kornezov told Foreign Minister Mladenov, and enumerated four international agreements ratified by Bulgaria contradicted by the proposed legislation.

"Mr. Kornezov, thank you for arosing emotions in the plenary hall, even though there was no point in what you said," Mladenov retorted. "The Bulgarian diplomatic corps is special, and it requires special and specific qualities but this does not mean that its officials do not need to answer the criteria that are in place for the rest of the Bulgarian civil servants," said the minister defending the draft law.

At the beginning of May 2011, 13 out of the 35 ambassadors with communist secret service records were returned to Bulgaria for an indefinite consultation period, with the remaining ones to be recalled in June.

However, according to the Constitution, Bulgaria's Ambassadors can only be recalled by the President. President Georgi Parvanov refused to sign the decrees for the diplomats' dismissal.

The amendments to the Bulgarian Diplomatic Service Act will enter into force after the Parliament adopts at a second reading.

In an interview for Novinite.com (Sofia News Agency) in early June 2011, Foreign Minister Nikolay Mladenov said that the legislation banning former DS agents from serving in the Bulgarian diplomatic corps will be in place by the end of 2011.