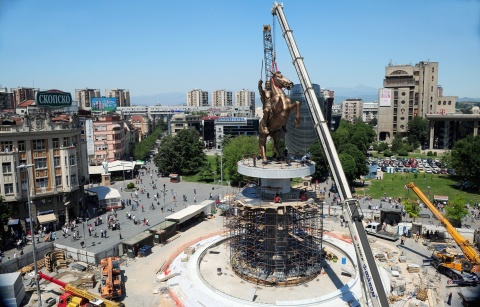 A massive statue of Alexander the Great on his horse Bucephalus stands on its position on a pedestal on Macedonia Square, the central square of the capital of Skopje, The Former Yugoslav Republic of Macedonia, 21 June 2011. Photo by EPA/'BGNES

Two new statues of Philip II of Macedon were opened Tuesday, one in Skopje and one in Bitola, as the Balkan country's government continues its ambitious renovation plan.

Even though Philip II was "outshone" by his son Alexander the Great, whose gigantic monument was opened later the same day, people flocked to see the father's new statues, too.

On Tuesday, the controversial 13-meter high statue depicting Alexander the Great on horseback was officially opened in Skopje, adding fuel to the conflict with Greece, which also claims inheritance of the historical figure.

On Monday, EU Enlargement Commissioner Stefan Fule said that if Macedonia continues to take actions perceived by Greece as "provocations" and fails to make faster progress in its reforms, the country could lose its EU candidate status.

Meanwhile, Facebook users have started a peculiar initiative for the renaming of Skopje and Bitolia as Alexandria and Heraklea respectively in order to further emphasize what Macedonians perceive as their "ancient" history.