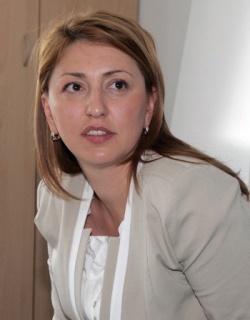 The brand new Chair of Sofia's City Court, Vladimira Yaneva, has been already involved in a conflict of interests scandal. Photo by BGNES

Yaneva, who has admitted to be close family friend of Interior Minister, Tsvetan Tsvetanov, stirred a storm of controversy with the admission and with allegedly committing conflict of interests.

In mid-June, the Ethics Commission at Bulgaria's Supreme Judicial Council, VSS, decided to ask the Judicial Inspectorate to conduct an audit of the judge despite earlier statements the Inspectorate would probe the entire criminal department of the Court.

The move was triggered by media reports the new Court Head failed to declare several properties and likely committed conflict of interests by attempting to halt a legal case that could implicate her father in murky real estate deals.

One of the numerous cases against the company had ended at Yaneva's desk last year, assigned to her as judge. A check in the property register, however, revealed her father had purchased two commercial facilities from the company. The deals have been concluded at the time two defendants in the case against Sofia Properties were part of the company's management at high-ranking posts.

Later, the site "Mediapool" reported that Yaneva had concluded the above said deals in person, claiming they have documentation to prove it.

The first violation stems from the filing of the case with Yaneva receiving the indictment against the two and 13 other defendants on July 22, 2010, but waited until December 20 to rule that the case must be dismissed – the time frame amounts to full 5 months while the law requires the judge to act within two months.

The second violation is related to the time between the date of Yaneva's rule and the date the Prosecutor's Office received it in writing – in April, 2011.

"It took 45 days for the notice to travel from one Sofia office to another without any listed reason," the Inspectorate points out.

The case was sent to the Sofia Appellate Court on April 1 after the Prosecutor's Office had argued against the dismissal of the case as early as February 14. The law requires waiting for all deadlines for all appeals in a particular case before sending it to a higher instance. In this case the deadline has been March 22, not April 1.

The fourth violation is the fact that even now the trial against one of the two top defendants, Toshko Dobrev, had not been scheduled. Yaneva is mandated to do this within two months after receiving the decision of the Appellate Court, which, in this case, has been to resume proceedings. The two-month deadline expired on June 12, 2011.

Despite their conclusions, the Inspectorate does not propose sanctioning Yaneva. But, after examining the report, VSS can impose such sanctions.

Usually VSS only penalizes magistrates, who fail to adhere to deadlines with notes and remarks, and lowers wages only when there are persistent delays.

The Inspectorate further has no right to carry out the most important probe – the one of alleged conflict of interests – if Yaneva has purchased on behalf of her father's company two stores from the municipal Sofia Properties when Dobrev was its manager.

A special panel is yet to begin checking into the Sofia Properties affair.

At the end of May, Yaneva, who has eight years of experience, four of them on maternity leave, won the appointment at second round against Velichka Tsanova, a judge with extensive experience, Deputy Chair and temporarily in charge of the same court.

The appointment sent shockwaves through the judicial system in Bulgaria, triggering several resignations with accusations the executive power is interfering and chocking the Courts.

Four senior judges – Kapka Kostova and Galina Zaharova from VSS, Dushana Zdravkova from the Varna Regional Court (known as one of the founders of Tsvetanov's ruling GERB, and former GERB MEP), and Tsanova resigned in a bout of outrage by the appointment.