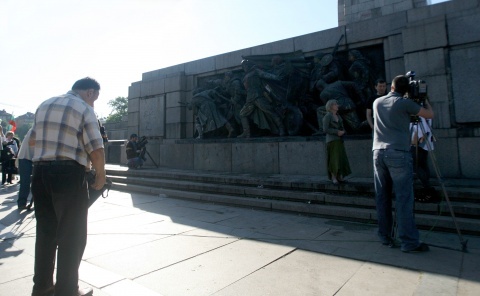 Russia has stated it is enraged by the recent makeover of the Soviet Army Monument in the Bulgarian capital Sofia, in which it was painted to look like a set of US comic characters and other pop culture figures.

"The unstopping acts of vandalism against the Soviet Army Monument in downtown Sofia and the efforts on behalf of certain political formations to have it removed are pitiful," Wednesday's statement sent by the Russian Interior Ministry says.

The figures were washed clean overnight on Tuesday, again by unknown citizens.

"We are convinced that acts like that do not reflect the attitude of the majority of Bulgarians, with whom we have been connect in friendship, cooperation and mutual help for centuries," the Russian statement goes.

Russia's protest comes on the exact same date on which the country celebrates the 70th anniversary of the Great Patriotic War.

On June 22, 1941, Hitler's Germany took Stalin and the Soviet leadership by surprise by breaking the Nazi -Pact of August 24, 1939, and invading the European territory of the USSR on a front of several thousand kilometers, a move judged to be the fuhrer's decisive mistake of that ultimately led to the destruction of fascism in Europe.

On Tuesday, the Russian Embassy in Sofia came up with a special statement concerning the Soviet Army monument's makeover, saying "The desecration of the memory of the warriors who liberated Bulgaria and Europe from fascism was committed with extreme cynicism, which does not have a precedent in other European countries with similar monuments."