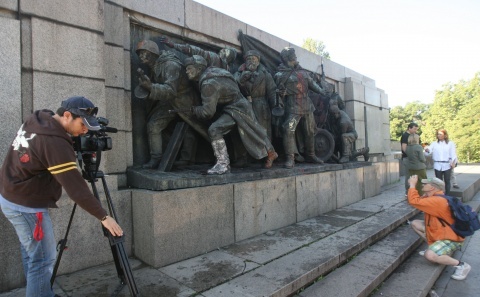 A public prayer service will be held Wednesday in front of the Soviet Army monument in downtown Sofia to commemorate the 70th anniversary of Russia's Great Patriotic War.

The event is to take place just three days after the monument's soldier figures were painted by an unknown artist to represent US popular culture characters and one day after it was washed clean by unknown citizens overnight.

On June 22, 1941, Hitler's Germany took Stalin and the Soviet leadership by surprise by breaking the Nazi -Pact of August 24, 1939, and invading the European territory of the USSR on a front of several thousand kilometers.

The Nazi-Soviet War is judged by many as the most fierce and bloodiest part of World War II. It is also often described as the decisive mistake of German national-socialist fuhrer Adolf Hitler that ultimately led to the destruction of fascism in Europe.

As a result of the attack and the four years of war in Europe, the Soviet Union suffered more than 26 million civilian and military deaths. After the defeat of the Nazis, however, Stalin's leadership got to establish a large sphere of influence in Eastern Europe - the so called Communist Bloc.

On Tuesday, the Russian Embassy in Sofia came up with a special statement concerning the Soviet Army monument's makeover, saying "The desecration of the memory of the warriors who liberated Bulgaria and Europe from fascism was committed with extreme cynicism, which does not have a precedent in other European countries with similar monuments."