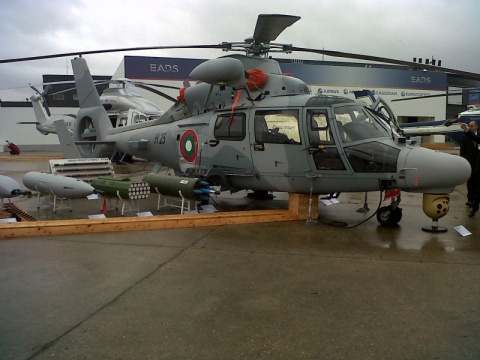 The Bulgarian Navy will end up with 3 Panther helicopters from EADS's Eurocopter. Photo by Defense Ministry

Bulgaria's government and Eurocopter have finally reached an agreement on the troubled deal for the purchase of 6 Panther helicopters for Bulgarian Navy, with Eurocopter agreeing to cut the deal in half.

After earlier on Tuesday, Bulgaria's Defense Minister Anyu Angelov got his French counterpart Gerard Longuet to agree to releasing Bulgaria of half of the Panthers, later the same day Angelov and Olivier Michalon, Eurocopter's Vice President of Sales for Europe and Central Asia, signed an agreement which meets the Bulgarian demands.

Thus, instead of 6 Panther helicopters, Bulgaria will get 3, and they will be supplied by the end of the year. What is more, the advance funds already transferred by the Bulgarian government to Societe Generale, the intermediary bank, for all six originally negotiated helicopters will be used to cover the cost of the three Panthers that Bulgaria will receive. The price will also cover maintenance costs and spare parts as well penalties.

According to the Bulgarian Defense Ministry, there are remaining issues of dispute between Eurocopter and the Bulgarian government but these will be settled with continuing talks in a spirit of understanding.

The Panther helicopters will be unique for the Bulgarian Navy, which currently has no similar aircraft. They can be used for reconaissance and control of aquatory, rescues, evacuation, fighting piracy, illegal trafficiking, humanitarian operations.

The Panthers will be stationed in the Chaika air base near Varna; they are expected in September, October, and November 2011.

According to Angelov, his team managed to defend Bulgaria's interests – i.e. to negotiate a downsizing of the arms deal – in hard talks that took seven months.

Last week, Bulgaria's Cabinet authorized Defense Minister Anyu Angelov to conduct talks with helicopter manufacturer Eurocopter in order to shake off the purchase of 3 out of 6 "Panther" helicopters for the Bulgarian Navy.

This decision is the latest in a series of attempts on part of Bulgaria's center-right Borisov Cabinet to renegotiate a number of major arms purchase deals made by previous governments under loose contracts and in a time when the Bulgarian budget enjoyed a big surplus.

According to Wednesday's decision of the Bulgarian government, the rationale for asking Eurocopter to cut in half the helicopter order is "the lack of money" of the Bulgarian Defense Ministry.

Once it gets Eurocopter to agree to downsizing the Panther deal, the Bulgarian government hopes to receive the three Panthers for the Bulgarian Navy by the end of 2011.

Minister Angelov has previously described the talks with Eurocopter as "extremely difficult" because they have to be conducted not directly with the supplier but through a bank, which is an intermediary.

Subsequently, the Bulgarian government decided to pay all the money for the Cougars and to ask Eurocopter to renegotiate the deal in order to give up buying the three Panthers but this decision was not formalized until Wednesday, June 15, 2011.

In December 2010, the 12th Cougar helicopter arrived from France, and was received at the Krumovo base of the Bulgarian Air Force. According to a statement of the Bulgarian Defense Ministry, the 12 Cougars for the Air Force are to be used for "combat searches and rescue operations."

In August 2010, Bulgaria's government allocated BGN 256 M from the country's fiscal reserve in order to complete several arms deals with foreign companies widely seen as problematic, including the deal with Eurocopter.

At present, the Bulgarian Air Force cannot even use the helicopters already delivered to them because under the terms of the deal they are not entitled to do that until the accounts have been fully settled.

Back in December 2010, Angelov indicated that Eurocopter had very little desire to renounce the penalties worth EUR 12 M that Bulgaria has to pay for delaying its scheduled payments.

The Bulgarian government has been holding meetings with the European Aeronautic Defence and Space Company N.V. (EADS), which is Eurocopter's parent company, in an attempt to reach a settlement sooner.