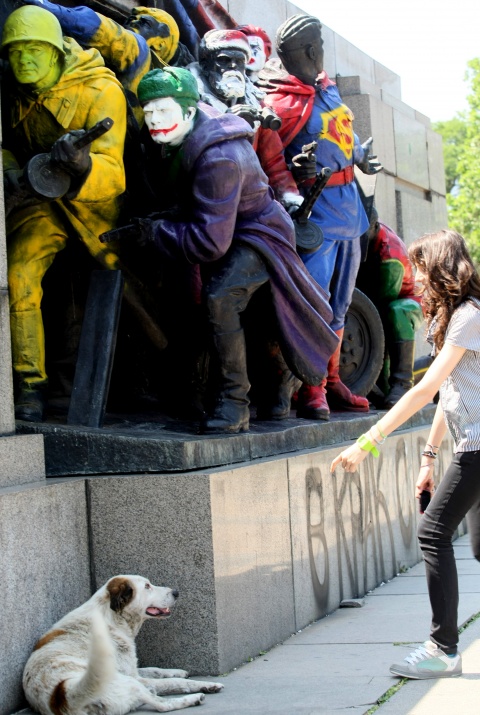 Pictured: the "decorated" monument of the Soviet Army in Sofia in which Soviet soldiers ended up as Western popular culture characters. Photo by BGNES

The Russian Embassy in Bulgaria is infuriated by the decoration of soldier figures from the Soviet Army monument in Sofia as Western popular culture characters, whose "vandal" author is wanted by the Bulgarian police.

The reaction of the Russian Embassy came on Tuesday, hours after someone had mysteriously cleaned the monument overnight, and three days after the mysterious artists painted the Soviet Army monument figures, also overnight.

The unknown decorator had painted the bronze figures of Soviet soldiers turning into various characters – including Superman, Santa Claus, Batman's friend Robin and his adversary the Joker (Batman himself is absent), and McDonalds's symbol Ronald McDonald, among others.

The Soviet flag waved by the soldiers was painted to become a US flag, while a big inscription added by the artist says below the soldier statues said, "Rolling with Time."

"The desecration of the memory of the warriors who liberated Bulgaria and Europe from fascism was committed with extreme cynicysm, which does not have a precedent in other European countries with similar monuments," the Russian Embassy in Sofia said in its special statement, adding, "There is no way we cannot be worried by the fact that this happened right before the 70th year since the start of the Great Patriotic War, when the entire world bows heads to the many millions of victims of the peoples of the USSR in the name of European peace. We are decisively against the distortion of history and demonstrations of disrespect against one of its most tragic episodes."

The Russian Embassy further points out that the Soviet Army monument in Sofia is under the protection of the Bulgarian legislation, international law, and bilateral agreements.

"The question about the respectable attitude towards the monuments of our common past is of deep interest for both the Russian, and the Bulgarian society," says the Russian Embassy, emphasizing that it is grateful to those Bulgarian public organizations and media who condemned the "desecration" of the Soviet Army monument.