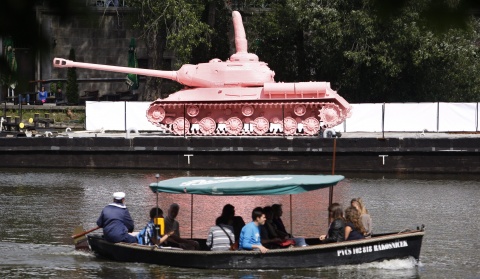 The famous Soviet tank painted pink by Czech artist David Cerny in 1991 has been returned from the Military Technical Museum in Lesany, central Bohemia, to Prague.

Before Cerny's provocation, the tank used to be the centerpiece of a memorial at Prague's Kinsky Square to the liberation from fascism of Czechoslovakia in 1945. However, many Czechs viewed the tank not as a symbol of liberation from the Nazis but as one marking the start of decades of Soviet occupation.

The painted tank was installed Monday on a floating pontoon by the Vltava river, where it will be displayed until July 1 within the Week of Freedom festival commemorating the departure of Soviet troops from the country.