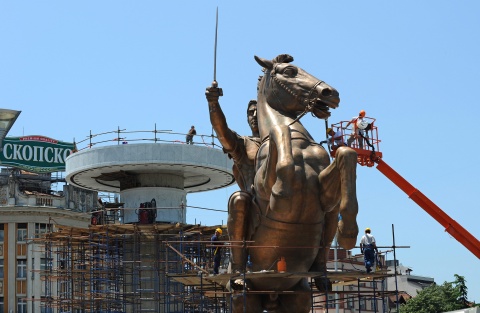 If Macedonia continues to take actions perceived by Greece as "provocations" and fails to make faster progress in its reforms, the country could lose its EU candidate status, EU Enlargement Commissioner Stefan Fule said.

Speaking before the oppositional Macedonian A1 TV channel, Fule commented the decision by PM Nikola Gruevski's government to erect a 12-meter high statue of a "warrior on horseback" resembling Alexander the Great in downtown Skopje, which was finished over the weekend and enraged Greece.

"Seriously, if you have a neighbour, and I'm not talking about two states now, and there is an issue between two of you, whatever the nature of that issue is, and you are trying sincerely to solve it, I guess you would avoid doing anything that your neighbour might call a provocation. This is simple logic. I would expect the government in Skopje to avoid doing things which would be called by the other side provocations," Fule said, as cited by EurActiv.

The EU Commissioner added he was not impressed by how reforms are going in Macedonia, either:

"Am I satisfied with the tempo of reform? Not really. As soon as the government is being formed, if we see clear steps toward renewing the reform tempo in your country, then I don't see any reason why we should change our recommendation. If we have a feeling that instead of progress there is a regress, if we have a feeling that instead of going forward you are going backwards, we would probably have to reassess that recommendation to start accession negotiations," F?le said.

Macedonia's government has been persistently criticized for putting its bid on the nationalist card and spending huge amounts of money on high-flown projects such as renovations in Skopje to reflect the "antique glory of Macedonia," and a giant monument of Alexander The Great, which has triggered fury in Greece. There is a widespread belief in the Balkan country that Alexander the Great has to do with their history as a nation.