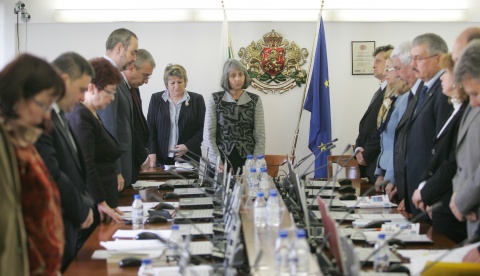 A session of the Supreme Judicial Council (VSS), March 23, 2011. Bulgarian citizens have been invited to press for the resignations of all VSS members via personal e-mails and short text messages. Photo by BGNES

Bulgarians who want to see the Supreme Judicial Council (VSS) dissolved can now refer their calls to all of the VSS members via e-mail or over the phone.

The Bulgarian Helsinki Committee has launched a campaign titled "Farewell, VSS", allowing Bulgarian citizens to send an e-mail to the VSS members with the following text: "Please, resign. You are violating my fundamental right to an independent court". The protest message can be sent through the website of the human rights watchdog.

At the same time, www.bivol.bg, a project for investigative journalism, published the cell phone numbers of all VSS members, urging Bulgarian taxpayers, who pay their salaries to politely ask them to leave office.

"For the sake of Bulgaria's judicial system, send a short text message reading "Right Honorables, file your resignations! For the sake of the country!", www.bivol.bg called.

Apart from that, a campaign for an all-out reform of the judiciary was launched on Facebook some ten days ago, with two flash mobs already staged.

The call for the resignations of the VSS members was first issued by the Union of Judges in Bulgaria (UJB). The proposal has not yet been discussed by VSS, although it was put forth by an organization comprising of 1000 judges.

The Bulgarian Parliament, which elects 1/2 of VSS, has remained similarly aloof to the will of the judges for a substantial reform aimed at overcoming the ongoing "unprecedented crisis of confidence".

The judges' discontent was sparked by the controversial, allegedly "crony", appointment of Vladimira Yaneva as Chair of the Sofia City Court (SCC).

In a bid to sidestep a new spate of accusations of political interference, ruling party GERB has refrained from submitting nominations for new VSS members to replace the two dismissed over the scandal with the notorious "businessman" Krasio the Black.

Instead of GERB MPs, the bids were filed by independent MPs supportive of the government.