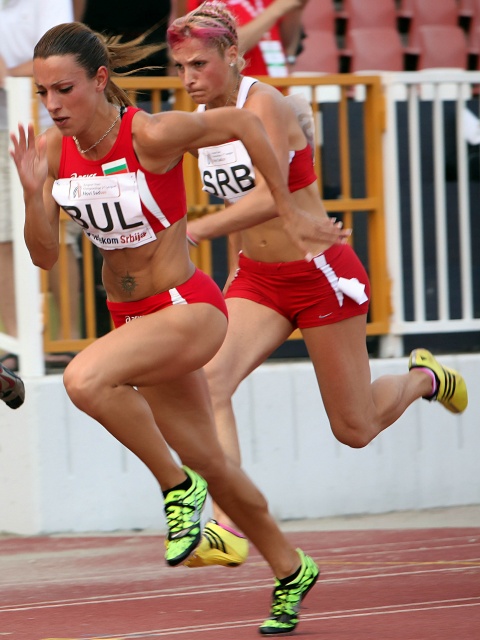 Bulgarian sprinter Ivet Lalova on her way to winning the women's 100m at the European Team Championships Second League in Novi Sad, Serbia, on Saturday. Photo by European Athletics

The Bulgarian won all three events in which she competed at the championship, including the 100m and the relay-race, winning maximum number of points for her team.

"I am happy with my victories. Novi Sad is too beautiful and too hot," said Lalova.

The sprinter guided Bulgaria to the top of the table at the end of two day on Sunday with a total of 167,5 points, followed by Estonia – 164 and Lithuania – 150.

Lalova, the second fastest ever European sprinter with 10.77 set in 2005, is obviously coming closer to her glory days before she broke her leg in a freak accident and underwent seven operations.

This year she has been in great form and scored a sensational victory at 100 meters in the Diamond League track and field tournament in the Norwegian capital Oslo.

Lalova, 27, is the sixth fastest woman in the world, and also widely known as the fastest white woman.