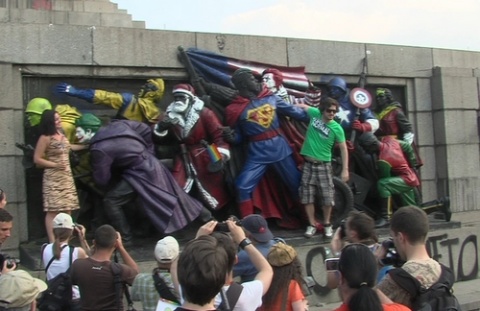 Foreign tourists have flocked to take photos with the "Westernized" version of the Soviet Army monument in Sofia. Photo by BGNES

The Bulgarian police have started a search for an unknown artist, also described as a "vandal", who decorated part of the soldier statues on the Soviet Army monument as Western popular culture heroes.

The unknown decorator has painted the bronze figures of Soviet soldiers turning into various characters – including Superman, Santa Claus, Batman's friend Robin and his adversary the Joker (Batman himself is absent), and McDonalds's symbol Ronald McDonald, among others.

The "westernizing" decoration of part of the Soviet Army monument has proven quite popular with flocks of foreign tourists rushing to take photos with it.

The Soviet Army monument in the Bulgarian capital Sofia has been a bone of contention among "anti-communists", "russophobes", and other groups ever since the fall of communism in 1989.