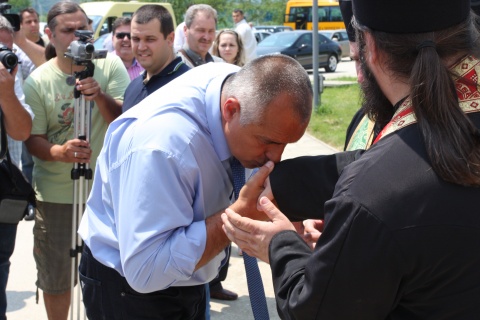 Bulgaria's Prime Minister Boyko Borisov and Varna Bishop Kiril have exchange warm niceties and praises, with the bishop going as far as comparing Borisov with the ruler who christianized the First Bulgarian Empire in the 9th century.

The Bulgarian Prime Minister spoke in the village of Padina in Eastern Bulgaria Saturday where he delivered a lecture on the future of the country.

In his speech, Borisov emphasized the construction of new churches saying that new Orthodox temples are being opened or existing ones are being repaired every week across Bulgaria since religion plays a bigger role in people's lives in the even of an "economic and moral crisis."

"I witness how after each opening of a new church people's faces change, and they start seeing the future with more optimism," the PM declared.

The Bishop of Varna and Veliki Preslav (Veliki Preslav is Bulgaria's first Christian capital – 893 AD-971 AD – editor's note) Kiril in turn praised the Borisov Cabinet for lending support to the construction and restauration of new churches.

Bishop Kiril even said the government was continuing the mission of Knyaz (Slavic title equal to "King") Boris I (r. 851-889 AD), the ruler who in 864 AD christianized the First Bulgarian Empire making Eastern Orthodox Christianity the official religion of Bulgaria.

The bishop expressed confidence the Borisov Cabinet will continue its policies in support of religious temples.