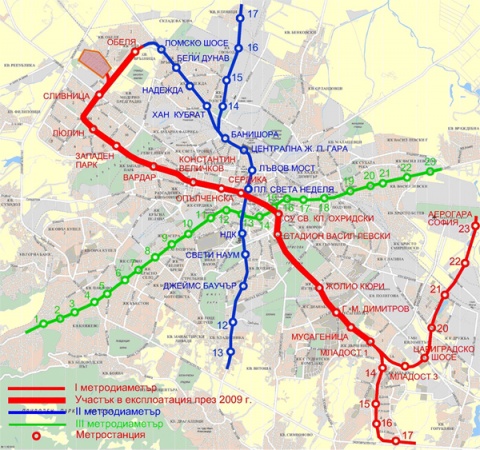 The route and type of the third line of the Sofia subway (in green) is to be decided in the coming weeks. Map by Sofia Metropolitan

The authorities in the Bulgarian capital Sofia are still mulling the route and type of the third line of the Sofia Metro, while the first two lines are still under construction.

Four different options for the third line of the Sofia Metro will be presented on Monday by the Czech firm Metroproekt Prague, a consultant to the Sofia Municipality, the Monitor daily reported Saturday.

The third line of the Sofia Metro is supposed to run from the southwest to the northeast of the city via the downtown, i.e. from the Knyazhevo quarter to the Vasil Levski quarter.

According to Chief Sofia Architect Petar Dikov, depending what option the municipality will choose, the third line of the Sofia Metro will cost between EUR 350 M and EUR 900 M.

Dikov and other municipal officials have been in favor of using light rail, i.e. a high-speed tram for the outer sections of the third line, and an underground rail for the section going through the city center, but the decision is far from finalized. In the recent months, several NGOs voiced concerns that a light rail could block the congested traffick in Sofia further, and demanded a large underground rail section.

Stoyan Bratoev, head of the Sofia Metropolitan company, has announced that the concept for the third line of the Sofia Metro should be ready in 2012 so that Bulgaria can ask the EU for funding for the project as of 2014.

The line will be divided in several lots, and the downtown section and one of the light-rail outer sections are supposed to be completed by 2018, Bratoev explained.

At present, only the first line of the Sofia Metro – from the Obelya and Lyulin to the Mladost quarter – is operational, and it is still being extended in the southeast to the Sofia International Airport and Business Park Sofia in the Mladost 4 quarter.

The second line of the Sofia Metro – from the Nadezhda quarter to the downtown and the Lozenets quarter – will be inaugurated in 2012.

Even with just one incomplete line running, the Sofia Metro is the most profitable municipal company in Sofia, transporting about 200 000 daily. The number is still far smaller than the city bus, tram, and trolley bus ground transport because of the still limited reach of the subway.