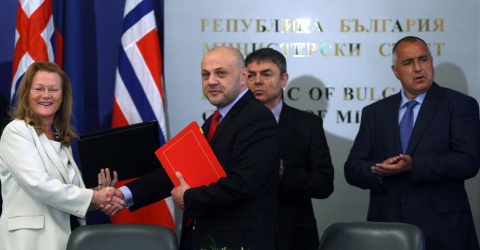 Norway's Ambassador in Sofia Tove Skarstein (left) with Bulgarian EU Funds Minister Tomislav Donchev (right) at the signing of the memorandums for Norway/EEA grants, in the presence of Bulgarian PM Borisov (right). EPA/BGNES

The funding provide by Norway, Iceland, and Liechtenstein will be used to support Bulgarian projects in the fields of healthcare, education, cultural and natural heritage, green industry innovations, energy efficiency, renewable energy sources, and cooperation within the Schengen Area.

Bulgarian Prime Minister Boyko Borisov thanked the people and governments of Norway, Iceland, and Liechtenstein, while Bulgarian Minister in charge of EU Funds absorption Tomislav Donchev pointed out that all state institutions, municipalities, NGOs, and firms in Bulgaria are eligible to apply for the money.

Norwegian Ambassador Tove Skarstein has underscroed the good cooperation with Bulgarian partners, and the high results achieved in the spending of Norway and EEA funds so far.

During the first program period, Bulgaria received EUR 41.5 M in Norway/EEA grants. Some of the projects this money was spent on include the first Museum of Contemporary Art in Bulgaria, a digital center at the National Library, archaeological excavations on the St. Ivan island near Sozopol where relics of St. John the Baptist where found, a solar energy park, tourist and information centers, among others.