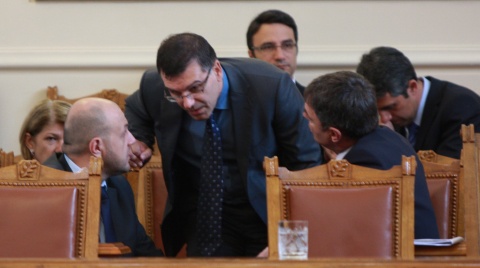 The second no confidence vote against the government of Prime Minister Boiko Borisov, who did not attend the session, failed to topple the minority cabinet. Photo by Sofia Photo Agency

Bulgaria's center-right government of Prime Minister Boyko Borisov expectedly survived on Friday a no confidence vote, submitted by the opposition over its alleged failure in anti-crisis policies.

A total of 124 members of parliament voted against, 70 supported it, while 2 abstained.

Under the Bulgarian legislation, to survive in a vote of no confidence the government needs a simple majority of all 240 MPs to back it.

The positive outcome for the government came after four hours of heated debates on Thursday, which however were not aired on the national radio and TV, and thanks to the support of nine independent MPs.

The ruling GERB party has 117 of a total of 240 seats in Bulgaria's unicameral parliament and has so far ruled with the support of 17 deputies from Ataka and 14 members of the small center-right Blue Coalition.

After straining his relations with the cabinet however the nationalist Ataka leader Volen Siderov boycotted the vote, as well as the members of the Blue Coalition, which has been an uneasy and highly critical ally of GERB.

The nationalist party and the Blue Coalition, who have 31 members in parliament, said they did not participate in the vote as they did not wish to vote the same way as their arch enemies, the oppositionary Bulgarian Socialist Party and the ethnic Turkish Movement for Rights and Freedoms.

Prior to the vote the ruling majority rejected a proposal for a roll call vote, fuelling suspicions of vote purchasing.

Prime Minister Boyko Boriov did not attend the parliamentary session, saying he does not "feel like meeting the people there".

This is the second no confidence vote that the center-right government of Boyko Borisov, which swept to power in the summer of 2009, faced. The first one was tabled over its health care policy and failed due to the votes of GERB and Ataka MPs.

If the Prime Minister had failed to get support, he would have had to come up with a new cabinet.

Bulgaria's opposition has said it plans to table a second no confidence vote against the center-right government of Boyko Borisov in case the first one fails to topple it.

Bulgaria's Socialist Party and the ethnic Turkish Movement for Rights and Freedoms (DPS) will table a new no confidence motion right before the summer recess in a bid to trigger snap polls in the autumn, Socialist leader Sergei Stanishev has said earlier this month.

Stanishev, a former prime minister, recently said he is ready to head a new government again although during his term he was known as an easily controllable politician with real power lying not in his office.

Two years after taking office as Bulgaria's prime minister, Boyko Borisov has seen his approval ratings dip sharply, according to a new poll.

Borisov's personal approval rate slumps for the first time to 35% and just as many are the people opposing him, says the survey, which was conducted by Alfa Research polling agency in the period May-June 2011 among 1020 respondents.

While demonstrating determination to crush crime and corruption, Borisov has been sending mixed signals on a list of tough economic and political issues, including taxes, the retirement age, health contributions and whether to scrap or build energy projects with Russia.

Borisov's supporters say the government of the center-right GERB party should stay in power because it has no political alternative - the other major parties have all been gravely discredited during their terms in office and are the ones to blame for leaving the country in tatters and for making it the poorest in Europe.

Should the current government collapse, all hell may break loose with either dozens of small parties fighting for power or an interim government, appointed by the Socialist President Georgi Parvanov, which will definitely serve Russia's interests, they say.