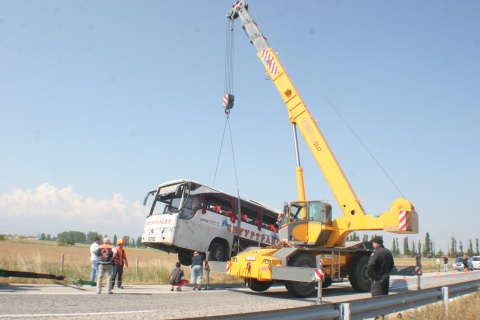 8 people have died, and 20 more have suffered injuries, with 1 of them in life-threatening condition, after a bus overturned en route from Sofia to Burgas.

Around 1.00 am Wednesday, the bus was driving on the Trakiya Highway when it capsized in the lane (at the 126th km) and went in flames.

Six persons died on the spot, two more soon after being admitted to the hospital. Doctors fear for the lives of one more.

Some of the injured suffered light injuries and were released from the hospital after receiving treatment.

Police and rescue teams have reacted swiftly in transporting injured to the nearby University Hospital in Plovdiv.

Traffic has been diverted away from the Trakiya Highway.

Investigations are underway at the site of the incident to discover the as yet undetermined cause of the tragic accident.