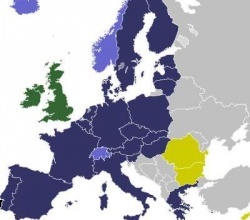 The upcoming Bulgarian and Romanian accession to Europe's border-free zone may result in more illegal immigration through the Greek-Turkish border, according to a Europol expert.

"The potential Bulgarian and Romanian Schengen entry...may increase the immigration pressure upon the Greek-Turkish border and the Bulgarian Black Sea border may become an immigration target," Jean Dominique Nollet, who heads Europol's "Analysis and Information" Department, stated in Sofia Tuesday.

Nollet attended a conference focused on the achievements of the two countries in implementing Schengen technical requirements.

Albanian-speaking and Turkish crime gangs, as well as criminals from the former Soviet republics may use the two EU newcomers' Schengen entry to boost their activity, the expert said, as cited by the BGNES news agency.

Bulgaria and Romania will not join the European Union's passport-free Schengen area until mid-2012 at the earliest, the bloc's interior ministers decided last Thursday.

European Union interior ministers met in Luxembourg just a day after the non-binding vote of the European Parliament, which allowed Bulgarians and Romanians to travel across Europe without a passport.

EU interior ministers acknowledged that Bulgaria and Romania's border controls have risen up to meet Schengen standards, but said the decision of their governments on when to accept new members into the zone will be based on wider criteria, including judicial reform and the fight against corruption.